The Letcher County Central Cougars traveled to Hindman to take last week for a rematch with Knott Central in a big district game. The Patriots handed the Cougars their only district loss earlier in the season, winning by 10 at Ermine.

The Patriots entered last week’s game with an 18-5 record, including two big victories over the Hazard Bulldogs and another big win over Perry Central. The Cougars entered the game with a 16-4 record while playing well down the stretch.

The Cougars knew it would take a big game on both ends of the floor to bring home a win against the Patriots and their star guards, Tate Cox and Stuart Stamper. Cox was unstoppable in the first game and the Cougars had to try to keep him under control and hope that Stamper was having an off night.

The game was tight throughout, as the Patriots led 12-11 after one quarter and 24-21 at the half. It stayed close, but Cox was not going to be stopped and scorched the nets for 29 points to help the Patriots squeak out a 63-60 victory. Stamper scored 14 points. 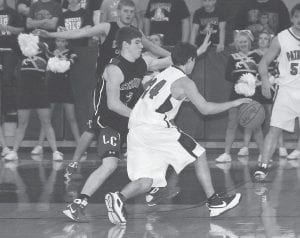 Letcher County Central freshman Logan Johnson did a good job of containing Knott Central’s Tate Cox while guarding the 14th Region star, but Cox still managed to do his share of damage in the Cougars’ loss to the homestanding Patriots last week. (Photo by Chris Anderson)

Charlie Banks led the Cougars with 21 points. He also pulled down 11 boards and dished out 11 assists for a “triple-double.” He was followed by point guard Devon Blair with 14 and shooting guard Josh Proffitt. Jordan Reynolds had 7 points, and Cole Cornett and Logan Johnson rounded out the scoring with 4 and 3 points.

On Saturday night, the Lions of Cordia made their annual visit to Ermine in another district game and another game that would be physical as always. Cordia, with a record of 7-12, is a veteran team and is always scrappy.

The Cougars started the game quickly and pulled out to a 4-0 lead after buckets by Cornett and Blair. After a trey by Collins for Cordia, the Cougars pulled out to huge lead at 21-5 and led at the end of one 25-7 after a beautiful tip-in at the buzzer by Eric Ison on an in-bounds play from Devon Blair.

The Lions started to really get in foul trouble in the third quarter, but managed to get the score down inside of 10 points at 41-32. The Cougars got the message and increased the lead to 16 at the end of three, thanks in large part to two treys by Charlie Banks to close out the quarter.

Banks scored 10 straight points including the first 4 of the fourth quarter and the Lions could not make another run at the Cougars. The Cougars ended up rolling 64- 42.

The Cougars shot 24-59 from the field for 40 percent and hit only 2-12 from behind the arc. They hit 14-19 free throws and pulled down 41 rebounds as they improved to 17-5 and 6-2 in district play to lock up second place behind Knott County in the standings.

Hazard, which visited Letcher Central last night, is the favorite to win the region. However, I think Perry Central, Knott Central, or Letcher Central could pull off an upset and win the 14th Region crown.

After 22 games the Cougars are led in scoring by Charlie Banks with 14 points a game. He is followed by Josh Proffitt with 13.7 points, Devon Blair with 9.7, Cole Cornett with 9.4 and Jordan Reynolds with 8.4 points.