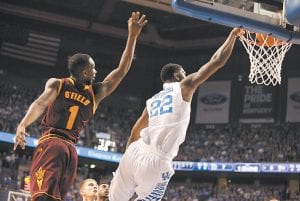 Kentucky Sports Radio’s Ryan Lemond thinks Alex Poythress (22) is the key for Kentucky against Louisville Saturday. “He is the only real physical presence UK has inside, and I’m certain UofL is going to try and take advantage of that,” Lemond said. (Photo by Vicky Graff )

The Letcher County Central High School Cougars continued their early season success last week and are unbeaten since their season-opening 66-63 loss to Harlan County back on December 1. Since then, the Cougars have reeled off eight straight wins — including three last week — to raise their record to 8-1.

The Cougars are not scheduled to play this week, but will swing back in to action next week in the three-day Coalfield Clash at the Prior Center in Wise, Virginia beginning December 28.

The Cougars led the Pirates 21- 12 after the first quarter but missed shots in the second quarter and allowed Belfry to rally to claim a 33-31 advantage at the half.

Carter, who was held to just two points in the second quarter, fueled the Cougars’ third-quarter comeback with 10 points and LCC led 48-43 heading into the fourth.

Despite 12 fourth-quarter points by Carter, the Cougars and Pirates both hung tough and regulation play ended with the score tied at 65-65. The teams battled to a 76-76 tie after the first overtime before the Cougars pulled away for the victory to raise their record to 6-1.