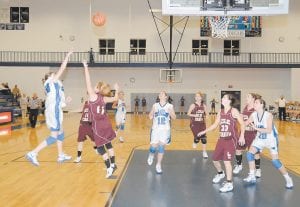 The Letcher Central Cougar boys were on the road over the holidays playing in the Mountain Schoolboy Classic at Belfry. The tournament had teams from Sheldon Clark, Belfry, Christian Academy of Louisville, and Letcher Central. The Cougars got the opportunity to play all three as they entered the tournament with a 6-1 record, their only loss coming to Knott Central earlier in the season at Ermine by 10.

The Cougars opened the tournament playing Sheldon Clark. The Cardinals entered the game with a record of 2-4 with hopes of turning things around, but the Cougars had none of that as they roared out to a 24-5 lead after one quarter and then extended the lead to 36-15 at the break.

It was all Cougars after the break as they led 59-33 after three and went on to roll 73-42. Ten players hit the scoring column as the Cougars improved to 7-1 led by senior player big Jordan Reynolds with 17 points. He has really become a force for the Cougars inside and along with Cole Cornett and Eric Ison the Cougars have a solid group of inside players to take some of the pressure off of Charlie Banks and the Cougars guard tandem of Devon Blair and Josh Proffitt.

Other scoring saw Banks hit for 13, Josh Proffitt 12, freshman Logan Johnson 8, Devon Blair 7 (and a big congratulations to Devon as he went over the 1,000 point mark for his career early in the first half). Cole Cornett tossed in 6, sophomore Brian Roark had 5, Ryan Brock and Eric Ison had 2 each and James Gose had 1. The Cardinals (2-5) were led by Porter with 17.

On the next night, the Cougars took on Christian Academy of Louisville (5-4). This was a much tighter game and a better match up for the Cougars.

The Cougars jumped out early to lead 15-7 after one, but Christian made it close at the break as they trailed 25-22 and continued to hang tough with the Cougars.

With Josh Proffitt and Devon Blair knocking it down from outside, Jordan Reynolds and Charlie Banks controlled the inside for the Cougars. All four would hit for double figures on the night as the Cougars hung on for a tough 64-56 victory and improved to 8-1 on the season. They were led by Josh Proffitt with 19 points followed by Jordan Reynolds with another monster game and 16 points. Charlie Banks hit for 17 and pulled down 7 boards. Devon Blair ran the show and tossed in 10. Cole Cornett was the only other Cougar to score as he hit for 4 points to round out the scoring. Christian Academy fell to 5-5. 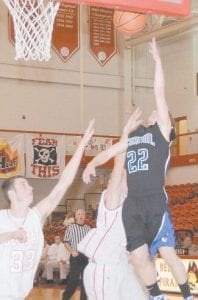 Letcher County Central senior Devin Blair drove to the basket for two in the Cougars’ win over Belfry. Blair scored 10 points in the game and has now scored more than 1,000 points in his career. (Photo by Chris Anderson)

On the final night of the Classic, the Cougars took on the host school in the championship, the Pirates of Belfry. Belfry is Cougar Coach Raymond Justice’s old stomping ground. His Cougars would be none too kind to the Pirates as they jumped out early again to lead 16-9 after one quarter. It got worse as Charlie Banks took over and owned the night.

The Cougars led 34-18 at the half and put up 42 points after the break to roll again 76-51 and improve to 9-1 on the season heading into the WYMT Classic this week at Perry County Central.

The Cougars took home the hardware and were led by Charlie Banks as he controlled the game with 31 points and 12 rebounds. He also came up with 6 assists. The Cougars also got a big game from Cole Cornett with 17 points as he continues to give the Cougars another scoring threat. Devon Blair had another good game with 10 points as did Jordan Reynolds who had 8. Josh Proffitt was held to 5 points, and Ryan Brock and Logan Johnson each had 2 and James Gose had 1.

For the tournament, Charlie Banks had 59 points and averaged 19 followed by Jordan Reynolds with 41 points and a 13-point average. Josh Proffitt had 36 points to average 12 and Devon Blair and Cole Cornett each had 27 to average 9 points a game. After 10 games the Cougars are led in scoring by Josh Proffitt with 14.6 points per game. He has hit 34 treys and averages better than three made each game. He has hit 34-61 for 55 percent. That is an awesome stat by itself.