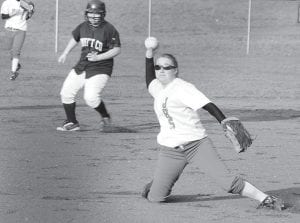 Jenkins shortstop Emily Walker fielded a tricky groundball and fired from one knee to get the runner going to third in the Lady Cavaliers’ first win of the season Monday evening at Knott County. The 18-0 win improved the team’s record to 1-3 on the season. (Photo by Chris Anderson)

The last game of the day will be Letcher Central against Clay County.

Less than a day after Letcher Central lost its home and season opener to Johnson Central last week, the Cougars traveled to Harlan to take on the Harlan County Black Bears.

Junior Ryan Brock, who was pitching for only the fourth time from a mound, pitched 3.2 innings for the Cougars. After three shutout innings, Brock ran into a little bit of trouble in the fourth. Still, he allowed only one hit, two runs (both earned), and struck out three hitters.

Trailing 4-2, the Cougars erupted for six runs in the top of the sixth. Casey Kincaid led off the inning with his second hit of the day, singling to left field. Nathan Adams followed with a walk and Dewey Baker was entered as a pinch runner. Corey Dollarhide laid down a perfect bunt down the third base line to load the bases. Matt Baker followed with an RBI infield single. Chase Adams and Matt Adams then singled, followed by a walk to McKenzie Smith. Michael Watts was hit by an 0-2 pitch to force in another run. Tanner Sexton knocked in the final run for the Cougars on a fielder’s choice ground ball to second base, scoring Smith and giving the Cougars an 8-4. lead.

Dallas Adams came on in relief of Brock to get the win. Michael Watts pitched a scoreless 6th and 7th inning striking out four Black Bears to earn the save.

“We did a much better job defensively today committing only one error,” said Coach Dean Bryan. “Nathan Adams, Michael Watts, and Tanner Sexton all put the ball in play on the ground with a runner on third base to score three of our eight runs today. Nate and Mike’s were with two strikes. I thought we responded well after the disappointing loss a day earlier.”

Freshman Corey Dollarhide pitched the complete game shutout. He threw only 66 pitches, striking out nine, while walking none over five innings.

Ethan Mason and Nick Boggs combined on the two-hit shutout as the jayvee team went 3-0 on the week. Mason, Corey Dollarhide, and Daniel Patterson each scored for Letcher Central. Corey Dollarhide had the lone hit, a single in the second inning that scored Patterson who walked. Dewey Baker had a sacrifice fly in the first inning that drove in Dollarhide who reached on an error, stole second, and reached third on a wild pitch. For the game, the Cougars took advantage of four walks, an error, and a hit batter.

J.V. Cougars Win Two In the first of two games against Perry County Central, won by Letcher Central by a score of 7-2, freshman Ethan Mason pitched 3 2/3 innings of no-hit baseball before being relieved in the fourth after backto back walks. Mason finished with four walks and three strikeouts. Eighth grader Caleb Baker came on to get the final four outs of the game.

All of the Cougars’ runs came in the second inning as they sent twelve batters to the plate. Collecting hits in the inning was Casey Seals (single, double), Jordan Short (double), Daniel Patterson, and Dallas Adams. Adams and Patterson had two runs batted in each in the inning. Also hitting safely in the game were Corey Dollarhide and Caleb Baker (two). Keaston Hall walked and scored in the Cougars big inning.

Perry Central scored five runs (two earned) in the first inning of the second game as the Cougars committed two costly errors, but the jayvee Cougars came back to win the game, 8-6.

The Commodores extended their lead to 6-0, but Letcher Central put together a big inning and scored seven runs. Corey Dollarhide and Caleb Baker led off the inning with back-to-back singles, and Dallas Adams followed with a walk to load the bases. After a strikeout, Jordan Short reached base on a walk, forcing in Dollarhide, and Casey Seals hit a slow roller to the second baseman that was mishandled.

With two outs in the inning, Daniel Patterson came through with his second two-RBI hit of the day. Keaston Hall followed with a walk, and both he and Patterson scored on a single by Dollarhide. The Cougars added an insurance run in the bottom of the fourth to make the final score 8-6.