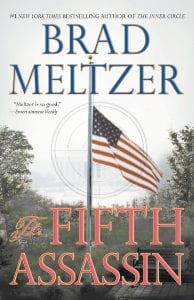 Brad Meltzer writes his first sequel, a follow-up to 2011’s “The Inner Circle,” and delivers one of his best books to date.

In “The Fifth Assassin,” Meltzer skillfully makes the narrative accessible to newcomers without alienating fans who are familiar with “The Inner Circle.” And readers will be richly rewarded.

Beecher White works as a top researcher for the National Archives. He is secretly a member of the Culper Ring, an organization with origins tracing back to George Washington and the Revolutionary War. Beecher has proof of a crime the president doesn’t want to become public.

Four presidents have fallen to assassin’s bullets over the course of U.S. history. What if the men responsible were part of a sinister group? Now it appears that a killer is re-enacting their deaths, down to the placement of the bullets and the weapon used in the assassinations.

History and suspense collide in shocking ways — and the intensity never lets up. Beecher carries the weight of the story. He’s a great character who will resonate with readers since he’s like the fun nextdoor neighbor or your best friend in college.

The ending of “The Fifth Assassin” appears to announce that Beecher White will return, and that cannot come fast enough.