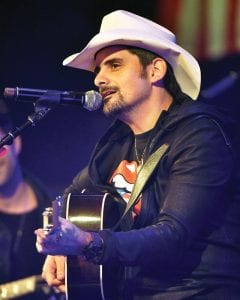 Tickets for country music star Brad Paisley’s February appearance in Pikeville are scheduled to go on sale to the general public this Friday, December 1, at 10 a.m.

Paisley is currently touring behind his latest album, Love and War, which was released last April and features guest appearances from rock stars Mick Jagger and John Fogerty along with rapper Timbaland and longtime country crooner “Whispering Bill” Anderson.

Love and War is the 11th studio album the 45-year-old Paisley has released in a career that began in 1999. In all, Paisley, a native of West Virginia, has sold more than 12 million albums while racking up 32 top 10 country music singles, including 19 Number One hits.

Tickets for the Pikeville concert range in price from $26.99 to $126.99. While tickets won’t be sold to the general public until 10 a.m. on Friday, they are already available through “presales” involving American Express, the music streaming service Spotify, fan clubs for opening acts Dustin Lynch and Chase Bryant, and VIP packages for Paisley.

The American Express presale was scheduled to begin Tuesday and run until Thursday (Nov. 30) at 10 p.m. Fan club ticket presales for Lynch and Bryant, as well as the Spotify presale, were set to begin at 10 a.m. Wednesday (Nov. 29) and end Thursday at 10 p.m.