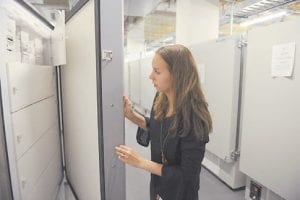 Professional Research Assistant/Neurology, Haley Steinert, retrieved a frozen sample of human brains stored in a freezer at the Biorepository at the University of Colorado School of Medicine at the Anschutz Medical Center in Denver earlier this month. (AP Photo/The Denver Post/Andy Cross)

The vast and chilly room buzzes with the whirl of 10 cooling fans and 62 giant freezers, machines so high tech they can send text messages to warn of intruders or when their temperature drops much below minus-112 degrees.

Cameras scan this repository at the University of Colorado medical campus, protecting the valuables frozen inside: pieces of prostate cancer, fetal stem cells and slices of human brain damaged by multiple sclerosis.

“It’s like walking into the twilight zone for me,” said Karen Wenzel, executive director of the Rocky Mountain MS Center.

With the recent relocation of the center’s brain bank, CU becomes home to the largest MS-exclusive collection of human brains in North America for the purpose of finding the cause and cure of the neurological disease.

The bank has about 350 brain slices and eventually, with additional freezers, will have the capacity to store thousands at its new state-of-the-art digs.

At the request of scientists researching multiple sclerosis across the globe, the brain samples are packed in dry ice and Styrofoam and shipped by next-day air.

“MS can be quite a devastating disease, and we still have a lot to learn about the biology,” said Dr. Timothy Vollmer, a neuroimmunologist and professor at the School of Medicine.

At least 400,000 people in the United States have multiple sclerosis, and within 15 years of the disease’s onset, about half of those people will have to use wheelchairs or walkers.

The best way to study MS is to look at a brain from a patient who has died. Brain scans of the living will show gray patches where a substance in the brain called myelin has died.

Within this scar tissue, the brain struggles to send messages telling the body to move or think. But to study the disease at a cellular level, scientists must look at the tissue under a microscope.

Sandee Walling, who was diagnosed with multiple sclerosis 16 years ago, is among the 1,400 people who have pledged to donate their brains to the Rocky Mountain bank upon death.

“The least I can do for everybody is try and contribute something to a cause and a cure,” said Walling, a Denver woman whose disease has left her sensitive to heat and depth perception. She used a walker early on in her diagnosis but believes she regained mobility through therapeutic pilates and yoga.

“I know it’s something that I have to do. Period,” she said.

Many patients who plan to donate look at it as their “last punch at MS,” Wenzel said. “They feel like their brain could be the one.”

It’s fitting the largest MS-exclusive brain bank on the continent is in Colorado because the state is at the epicenter of the disease, said Dr. Bette Kleinschmidt-DeMasters, a neurology professor who verifies the MS diagnosis of every donated brain.

About one in 580 Colorado residents has MS — one of the highest rates in the nation.

“It’s sort of like studying malaria if you live in Africa,” she said. Multiple sclerosis is most prevalent along the Earth’s 40th parallel, which runs through Boulder.

The cause is unknown, but scientists point to “tantalizing hints” that MS is triggered by some kind of infection, DeMasters said.

The disease is brought on by a combination of genetics and environmental toxins — researchers are looking at the combination of smoking and past mononucleosis infection, for example — but they have yet to discover the key to predicting and preventing it.

Typical onset of the disease happens around age 30, and women are twice as likely to have it than men.

It costs about $1,500, on average, to retrieve a brain and ship it to the bank, which also collects spinal-cord tissue from MS patients. Funding comes from the National MS Society.

Since 2004, more than 90 researchers worldwide have requested tissue from the brain bank, which the Rocky Mountain center previously housed at Swedish Medical Center in Englewood. The work has resulted in more than 20 pieces of published research.

The answers, CU doctors believe, lie in a combination of work from scientists around the world.

“It might not be for two or three or 10 more years before somebody puts all the pieces together to say, ‘This is the cause of MS,’ “ DeMasters said. “It’s not going to be that simple or we would have found it by now.”