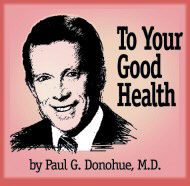 DEAR DR. DONOHUE: When my brother was 47, he died of a stroke caused by bleeding in his brain. He was fine one minute, and the next he was in a coma. An autopsy showed he had had an aneurysm that ruptured. I have four other brothers and three sisters. Should we all be checked for an aneurysm? I am now 66. — W.C.

ANSWER: An aneurysm is a weak spot on an artery wall. It looks like a blister. Aneurysms can develop on any artery, but they are mostly found on the aorta and on brain arteries. Should the aneurysm break, bleeding can be catastrophic.

Ruptured brain aneurysms account for 10 percent of strokes, and frequently they occur in younger people, ones not thought to be at risk of a stroke. The story is much like your brother’s. A person, apparently in good health, complains of having the worst headache ever. Then he might lapse into unconsciousness briefly. He might have a seizure. The mortality of a ruptured brain aneurysm is high, more than 50 percent.

First-degree relatives of a person who had a brain aneurysm have an increased risk of also having one, but the risk is relatively small, about 1 percent to 4.7 percent. A first-degree relative is a parent, brother, sister or child. The best way to detect a brain aneurysm is a special kind of scan called magnetic resonance angiography. It’s a magnetic resonance imaging — MRI — scan with dye injected into the arteries to outline any aneurysm. Most authorities don’t recommend screening first-degree relatives, because their risk is small and the procedure carries an equally small danger.

The booklet on stroke explains this common and sometimes crippling condition. Readers can obtain a copy by writing: Dr. Donohue — No. 902W, Box 536475, Orlando, FL 32853- 6475. Enclose a check or money order (no cash) for $4.75 U.S./$6 Canada with the recipient’s printed name and address. Please allow four weeks for delivery.

ANSWER: Pancreatic cancer’s average age of onset is 65. The risk of coming down with it increases with age. About 34,000 new cases of it occur yearly in the United States. It is the fourth leading cause of cancer deaths.

What makes pancreatic cancer such a peril is its lack of signs and symptoms in its early stages. Symptoms, when they do arise, include loss of appetite, a drop in weight, stomach discomfort or pain, nausea and a sensation of fullness after taking only a few bites of food. As the cancer grows, it blocks the drainage of bile, and the skin and whites of the eyes turn yellow.

Your symptoms are common to many things, and pancreatic cancer is not high on the list. However, I have learned one thing about medicine: When a person brings up a diagnosis, I can’t dismiss it, no matter how remote the chances of having it are. See your doctor. You and I will sleep better if you do.