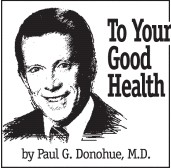 DEAR DR. DONOHUE: A friend of mine, 46 years old, with a wife and two children, died of a stroke. I also heard he died of a subarachnoid hemorrhage. Are they the same? He was the picture of health and was devoted to exercise. Could his exercise be responsible? He was almost a fanatic about it. — P.M.

ANSWER: A subarachnoid hemorrhage is a special kind of stroke. It’s due to the bursting of an aneurysm on one of the brain arteries. Aneurysms are small, balloon-like protrusions of a brain artery. They’re weak spots. “Subarachnoid” indicates that the artery is below one of the brain’s coverings — the arachnoid. It’s the same place where cerebrospinal fluid circulates. A rush of a large volume of blood into this space compresses the brain and compromises its function. The increased pressure on the brain adds to the threat of death.

Sometimes these weak bulges have been there from birth. In most instances, they arise during life. High blood pressure, smoking and excessive intake of alcohol contribute to their development. From 10 million to 15 million Americans have a cerebral aneurysm. Only a small percentage of these people die from it.

At the onset of bleeding, the involved person complains of a terrible headache, the worst he or she has ever had. The person then becomes unresponsive and slips into a coma. This sort of stroke has a high fatality rate, around 50 percent.

Answering your question about your friend’s devotion to exercise and its influence on his death is hard. Exercise did not cause the aneurysm to form. In unusual circumstances, it might have caused the aneurysm to break. Straining to lift a very heavy load while simultaneously holding the breath has been described as a possible reason for rupture of this kind of artery problem.

DEAR DR. DONOHUE: Recently a friend passed away from Creutzfeldt- Jakob disease. The total course of the disease took about 10 weeks, although some recall subtle changes earlier. This has been described as human mad cow disease, or very rapid Alzheimer’s. What can you tell us about it? — T.H.

ANSWER: It’s an infection due to a new kind of germ, one that is totally protein. No other living thing, if this truly is living, is composed only of protein. The germ is called a prion. When it finds its way into the brain, it causes a rapidly progressive and profound dementia. The prion might have been there for decades, however, before signs appear.

It is a truly rare disease that occurs in all parts of the world. Most of the time, it is fatal in a short time, about one year. No medicine stops its progress or improves its symptoms. Transmission of CJ disease to family members living under the same roof as the patient has not been described.