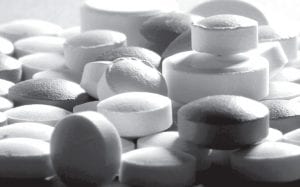 About two-thirds of all prescriptions are now generic medicines. (AP Photo/Matt Rourke)

Drug makers increased their prices last year by an average of 7.4 percent for brand-name medicines most commonly prescribed to the elderly, according to the advocacy group AARP.

The increase was about 2.5 times overall inflation, continuing a long-standing trend.

The advocacy group has tracked drug prices going back to 2002. Specifically, it looks at the prices charged to wholesalers. It noted that the price increases have been slightly greater since the Medicare drug benefit kicked in on Jan. 1, 2006.

In the four years before the benefit’s startup, wholesale prices rose between 5.3 percent and 6.6 percent annually, according to AARP’s tracking.

AARP officials said the outcry over the price of drugs was quite strong when Congress approved legislation establishing the drug benefit. Since the drug benefit began, that outcry has diminished, thanks to the federal government picking up much of the tab for beneficiaries’ medicine.

“Unfortunately, many manufactures have taken the absence of an outcry as a green light to go ahead and raise prices even more,” said John Rother, AARP’s policy director.

All but four of the 220 brandname prescriptions in the study had price increases during 2007. Nearly all exceeded the rate of general inflation. Among the top 25 drug products, the sleep aid Ambien had the largest price increase, 27.7 percent. Ambien is manufactured by Sanofi-Aventis. On the other end of the spectrum, Merck’s cholesterol drug Zocor had no price change in 2007. Also, Bristol-Myers Squibb’s blood thinner Plavix had a price increase of 0.5 percent.

The manufacturer’s wholesale price is the most substantial component of a prescription drug’s retail price. However, insurance companies, such as those that cover Medicare beneficiaries, typically negotiate confidential rebates from the manufacturer, and the plan’s customers benefit. Plans could potentially negate a higher wholesale price by negotiating a steeper discount or by lowering their reimbursement rates to pharmacies.

Still, a change in the wholesale price generally results in a similar percentage change in the price of most prescriptions, AARP said.

The trade group representing drug makers, the Pharmaceutical Research and Manufacturers of America, did not have immediate comment on the AARP report. In the past, the trade organization has protested comparing the rise in drug prices to general inflation, saying that a comparison

While the AARP’s report focused on higher prices for brand names, federal health officials note that more people are taking generic medicines. They say that trend has accelerated as a result of the Medicare drug benefit. Plans use tools, such as lower copayments for generics, to steer consumers to lower-priced medicines. Government economists say that about two-thirds of all prescriptions now are generics.

“That’s been the good-news story,” Rother said. “The plans have done what we hoped they would do, which is shift people to lower-cost generic drugs,” Rother said. “However, savings from people shifting to generics are being offset by these higher prices for brand names.”

The Pharmaceutical Research and Manufacturers of America: www.phrma.org/