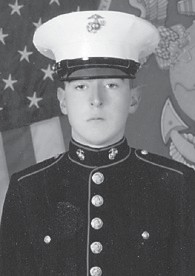 BRANDON LEE SEXTON completed Marine Corps boot camp at Parris Island, S.C., on April 4. He is the son of Marine Sgt. and Chief Instructor of Four Seasons Martial Arts Frank Sexton of Burdine and Angela Jones of Hiltons, Va. Sexton will go to Camp Geiger, N.C. for initial combat training. He is a graduate of Lighthouse Christian Academy in Kingsport, Tenn.