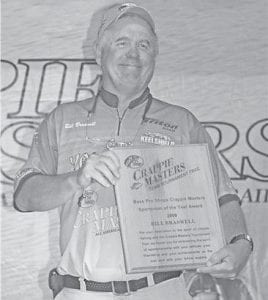 Braswell has competed on the Crappie Masters tournament trail since its beginning six years ago. Braswell had no idea he had been chosen for the honor.

“I didn’t expect it and I was very overwhelmed,” said Braswell. “I was at a loss for words.”

During the awards ceremony that took place at the Crappie Masters national championship ‘Classic’ tournament held at Grenada, Miss., in September, Braswell spoke of longtime friend and the first Crappie Masters Sportsman of the Year award winner, the late John Schantz. He said it began with Schantz, and that receiving the award and being associated with the quality group of previous winners is an honor in itself.