Husband of Hollywood powerhouse fights for her memory 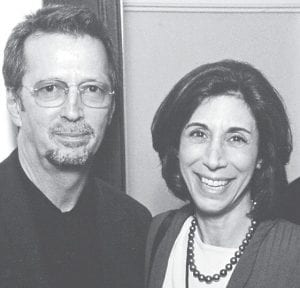 After the death of music publicist Ronnie Lippin from breast cancer in 2006, shown here with rock musician Eric Clapton, her husband established a partnership with the Tower Cancer Research Foundation to create an outreach program to educate those coping with cancer and their families and friends to help navigate the journey through cancer diagnosis and treatment. (AP Photo/Richard Lippin)

Richard Lippin reeled at the news: His wife, his partner in life and business – and one of Hollywood’s power women – had just been diagnosed with a rare form of breast cancer.

He could barely register what he was hearing. He didn’t know how to behave, what should he say to his wife, his family, their doctor.

For 15 months, he watched his wife take tests, medications and treatments. He felt helpless. He knew little about the disease, and even less about what, if anything, he needed to do to help.

And then it was over: His wife was dead, and all he had left was her memory.

“This can’t have happened for nothing. We can’t have gone through this and not have it mean something,” Lippin said recently.

So Lippin is working to keep alive his wife’s memory by working to educate other husbands and loved ones about breast cancer.

It was the helplessness that Lippin felt that was hardest to handle – that feeling of being powerless. It was something he had never really experienced.

For decades he and his wife, Ronnie, 59, had built The Lippin Group, one of the leading independent entertainment and media public relations and marketing firms in the country. If they encountered a problem, an obstacle, they figured out how to navigate it.

She represented some of the music industry’s biggest stars, from Eric Clapton to Prince. He, as he likes to joke, was “into everything else” – from representing “Law & Order” creator Dick Wolf to handling press and publicity for the Emmy Awards.

Brian Wilson once described Ronnie as one of the “most thoughtful people” he had ever met. Her easy-going demeanor put people at ease, and her soft touch with people made her more than just a manager to some of her clients. Rock icons – from Wilson to Elton John – called her friend.

Then in September 2005, two weeks after having a mammogram, Ronnie Lippin wife found a lump in her breast during a selfexamination.

“We sat on the bed, and she showed me where it was,” he says.

Days later, they received the news: abnormal squamous cells were discovered in the lump in her breast, which would later spread to her organs and then throughout her body.

They went to see specialists and she began a series of surgeries and drug therapies, including chemotherapy and radiation, to battle the disease.

They had questions, so many questions: How could you have had a clean mammogram and then be diagnosed weeks later with a rare form of breast cancer? Was there another test that she could have taken that might have alerted doctors earlier to her cancer? What was the proper form of treatment?

And perhaps the most nagging question of all: Are we doing the right things?

There were few immediate answers, and no guidelines for them to follow. The Lippins went everywhere, flying across the country to talk to doctors.

“I was always aware of breast cancer in the generic sense. But it wasn’t anything you ever concern yourself with until you’re in the middle of it,” Lippin said. “I knew I had to be strong for her. If I lost strength and hope, then I wouldn’t be doing anybody any good, especially her.”

In the first months after her diagnosis, Lippin said it was hard to believe his wife had a terminal disease. She looked like she had always looked: brown hair, brown eyes and a bright, wide smile. She also continued to work – taking care of her clients and her family.

But slowly the breast cancer and the sometimes debilitating treatments started to take their toll on her physically. By late October 2006, more than a year after her diagnosis, the disease was winning.

“That’s when we both knew it was going to be tough,” he said.

Sitting in his office in a high rise on the edge of Beverly Hills, surrounded by photos of his wife and daughter Alexandra, tears spilled down his cheeks as he relived their final days together: Sitting, talking, holding hands.

“I went through this period of mourning, and then I think it was followed by this period of introspection: How do I best recognize a woman I spent 35 years with?”

He wanted her death to have meaning. He wanted to share their experience, their journey through this “strange world” of cancer.

It began as a germ of an idea: “There have to be an awful lot of people out there going through this, and they have to be experiencing the same things I am.”

Over the next few months, he created the Ronnie Lippin Research Fellowship, grants for research on the early detection of breast cancer. He also established a partnership with the Tower Cancer Research Foundation to create an outreach program to educate those coping with cancer and their families and friends to help navigate the journey through cancer diagnosis and treatment.

The first results of the foundation’s work – survey results about what people fear most about cancer – were released this month.

The experience, he says, has helped him cope with the loss. It also, perhaps, has given him a way to take back that loss of control, that helplessness he felt with his wife’s battle with cancer.

These days, he says he still shares the efforts with his wife.

“Sometimes one of the most comforting tings is when I go to the cemetery, and I sit and tell her everything that’s happening,” he said. “There’s a part of it that allows me to feel a continued relationship.”