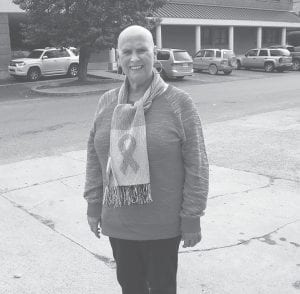 Retired nurse Dolly Caudill is undergoing treatment for breast cancer and wants to help others who suffer from the disease. (Eagle photo)

During her career as a licensed practical nurse, Dolly Caudill stood beside doctors when patients were told they had cancer.

Caudill, who suffers from breast cancer, is now retired. Back in the summer, she awoke one night with a feeling that she had forgotten to schedule her annual mammogram screening. Because she and her daughter, Kim Lush, who lives in Lexington, normally scheduled their mammogram appointments for the same day at Baptist Health in Lexington, Lush called the doctor’s office the next day to schedule a visit.

A tumor was found and Caudill was diagnosed with breast cancer on July 1. She said she hadn’t felt the tumor during a self-exam.

Soon after learning that she had “ductal carcinoma in situ” that had spread to her lymph nodes, Caudill began aggressive therapy. Every three weeks, Caudill travels with one of her four sisters to Lexington, where they stay at her daughter’s house while Caudill receives chemotherapy treatments at Baptist Health.

Her last chemotherapy appointment is scheduled for October 31 and Caudill wants to be able to sit on her daughter’s porch and watch two of her grandchildren Charlie, 8, and Mary, 5, trick-ortreat on Halloween.

“I have wonderful friends, family and pastor,” said Caudill. “My son and daughter have been very supportive of me.” Caudill’s son, Mark, lives with her at Isom and helps care for her.

Out of a group of six friends who get together for birthdays and holidays, Caudill and two Letcher women, Bonnie Asher and Linda Maggard, are going through cancer treatments.

“The doctors say this is unusual,” said Caudill, 61.

Caudill said it has helped her tremendously to be able to call her friends and talk about what they are going through, especially the day she lost her hair.

“That was a terrible day for me,” she said. “I called them and I was so upset. Somehow I didn’t think it was going to happen.”

She has opted not to wear wigs because they cause her to be hot and itchy. When in public Caudill wears knitted caps made by a friend. At home she doesn’t wear anything on her head.

Because of fatigue, Caudill retired as a nurse at Mountain Comprehensive

Health Corporation in 2013. Before working at MCHC, she was employed at Appalachian Regional Hospital for 11 years.

“I loved my job,” she said. “My patients were my number one priority.”

Caudill is telling her story to help others. She talked about her illness with a woman at a yard sale last week and the woman promised Caudill that she would schedule an appointment for a mammogram.

“Mammograms can and do save lives,” said Caudill. “I just have all of the hope in the world that I am going to be okay.”

Caudill wants to help others who have breast cancer by passing along advice and tips that she has learned in the past four months.

“Yogurt, ginger ale and popsicles have become my best friends,” she said of the foods she has found to help fight the nausea caused by her cancer treatments.

Caudill says her favorite song is “Somebody’s Praying” by country and bluegrass artist Ricky Skaggs. She asks her friends to pray for her at 9 a.m. on the days of her final two chemotherapy treatments — October 10 and October 31.

“You’ve got to have faith,” said Caudill.