Breathitt too tough for young Cougars 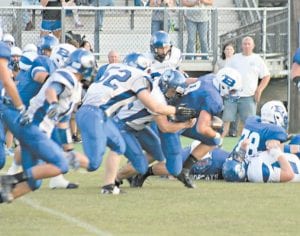 Letcher Central’s defenders had a tough time keeping up with the offense of No. 4-ranked Breathitt County in a game at Jackson last Friday night. Breathitt won the contest, 54-16. (Photo by Tonya Aslinger)

The Letcher County Central Cougars fell 54-16 to No. 4-ranked Breathitt County Friday night. The Cougars fought valiantly in the second half, but couldn’t overcome the slow start that saw them fall behind 31-0 at halftime.

The young Letcher Central team looked awestruck when they took the field at Breathitt County. In their first true road game of the year in front of a raucous crowd, the Cougars got off to a very slow start.

Breathitt County won the toss and elected to receive the kickoff. Senior all-state quarterback Richard Trent wasted no time driving the Bobcats down the field in a no huddle offense. Trent capped the drive off by scoring on a one-yard touchdown run. The extra point was good and LCC found itself down 7-0 just three minutes into the contest.

Letcher Central had a hard time blocking the blitzing Bobcat defense on the first possession. Facing a 3rd down and 23, LCC quarterback Zane Blair narrowly avoided getting sacked for a safety and tossed a pass toward running back Hunter Hall who made a spectacular one handed catch for a 12-yard gain. The Cougars were forced to punt and Breathitt County returned the punt to the Cougar 38-yard line. Trent scored again from one yard out, but on the extra point the Bobcats botched the snap and with 6:26 left in the first quarter the score was 13-0 in favor of Breathitt County.

LCC tried a trick play on its next possession to try and gain back momentum. Blair threw a lateral to receiver Keaston Hall who tried to throw another pass to Devin Wright on a go route. Wright flashed open, but the ball was slightly under thrown and intercepted by the defense. Trent completed two passes to speedster Ryan Cox to get deep into Cougar territory. On third and goal running back Brayton Fugate bulldozed his way into the end zone. Ryan Alzuraqi deflected the two-point conversion attempt to keep the score at 19-0.

On the next offensive drive, Blair threw an interception to give the ball back to Breathitt County. The Bobcats went up top and Trent threw a perfect pass to receiver James Blomberg for a 39- yard touchdown to make it 25-0.

LCC Coach Paul Rains and the Cougar offense made great adjustments at this point in the contest. They went with a short passing game and started to roll Blair out of the pocket to better protect him. On the next possession, Blair connected with Hunter Hall on three dump-off passes for a total of 23 yards and Dylan Kincer caught a six-yard pass for a first down to get into Breathitt County territory. On 3rd down and 6 from the Bobcat 39-yard line, Blair found senior Chris Tyree on an out route and he broke four tackles on his way to a 21-yard gain. A couple of penalties derailed the drive and the Cougar were forced to give the ball over on downs. The 13-play, 56-yard drive was a success in spite of not putting any points on the board.

Trent led Breathitt County on a methodical 11-play, 74-yard drive to eat up over six minutes off the clock. The drive culminated into Trent’s third touchdown run of the half from 10 yards out on a beautiful play fake. The score gave Breathitt County a 31-0 heading into halftime.

In the first half Blair completed 11 passes on 19 attempts for 101 yards. Hunter Hall was his favorite target with five receptions for 36 yards. On defense, Tyree was the leading tackler with nine.

Coach Rains felt the key to the game would be getting off to a good start and not falling behind early. The Cougars regrouped at halftime and played much better in the second half.

The Cougar defense forced a three and out thanks to linebacker Nick Mullins blitzing right up the middle and forcing Trent to overthrow his receiver on third down. LCC started with its best field position of the game and Tyree took a pass from Blair and simply refused to be tackled. Tyree rumbled for 31 yards to get to the Bobcats 17 yard line. On 3rd and one Blair took the shotgun snap, faked a handoff to Hunter Hall and broke a tackle on his way to an eight-yard touchdown run. Josh Boggs scampered around the right side for the two-point conversion and the score was 31-8.

Coach Rains rolled the dice and tried an onside kick that the Cougars nearly recovered. Stephen Fox came free and sacked Trent for an eight-yard loss. On third and 17 receiver Ryan Cox caught a pass from Trent on an in route that barely got enough yardage for the first down. Two plays later Trent scored on a 13-yard touchdown run. The two-point conversion was successful to make the score 39-8.

Breathitt tried a squib kick that LCC recovered on its own 48-yard line. The offensive line gave Blair plenty of time and Keaston Hall ran an out and up route. Hall caught the pass from Blair for a 24-yard gain. Hunter Hall ran eight yards up the middle on a draw play. Then Blair found Keaston Hall wide open in the back of the end zone for a 16-yard score. Tyree ran ball across the goal for a twopoint conversion. The three-play 52-yard drive took only 55 seconds and cut the score to 39-16.

On the next Bobcat drive, Trent milked the play clock down to almost one on every play before snapping the ball and the Cougar defense just couldn’t stop the Breathitt County rushing attack. Cox took a handoff and scored on the first play of the fourth quarter. The two-point conversion was successful and LCC found itself down 47-16.

Blair hit Keaston Hall on a screen pass for 12 yards. On 4th and four from the Bobcat 40 yard line, Tyree took a toss and fought his way for five yards and the first down. The drive stalled in the red zone and the Cougars turned it over on downs. Trent scored is fifth rushing touchdown of the game from 19 yards out. The extra point was good and the final score was 54-16.

Letcher County Central had many positives to take from this contest. If you got to the game late and watched the second half you would say the two teams were pretty even. Furthermore, the maturation of Blair was unbelievable. After a tough first quarter, Blair looked composed and made the proper reads and check downs of a veteran quarterback. Blair completed 22 passes on 36 attempts for 220 yards and a touchdown.

Keaston Hall looks like one of the best receivers in the mountains and caught nine balls for a 102 yards and a score. The running game looked much better this week with Hunter Hall and Tyree both having good games. The very young offensive line that play numerous freshman protected Blair much better in the second half against a very athletic Breathitt County defense.

The 54 points given up were not indicative of how well the Cougars defense played. Breathitt County has a very explosive no huddle offense and other than the one 39- yard pass, the LCC defense gave up no other big plays.

Tyree was all over the field making plays and led the defense with 13 tackles. Fox and Mullins looked good blitzing and Trent didn’t complete a single pass in the second half.

Hopefully the LCC team builds on their second half success this week when they travel to Franklin County to play. The Flyers have the leading candidate for Mr. Football in Ryan Timmons and the Cougars have a daunting task in trying to contain him. The game has a 7:30 p.m. kickoff Friday night in Frankfort.