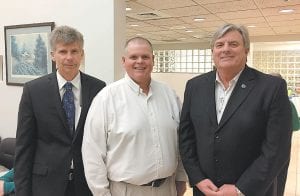 Pictured from left are Phil Miller, Van Breeding, and Kurt Mosley. Miller and Mosley are representatives of Staff Cares who interviewed Breeding for the Staff Cares 2017 Country Doctor of the Year Award.

A Letcher County doctor has been named a “Provisional Finalist” for the National 2017 Country Doctor of the Year Award.

Van Breeding, a physician who also serves as Director of Clinical Affairs at Mountain Comprehensive Health Care’s Whitesburg Clinic, is one of three finalists for the award and the only one who has been scheduled for an onsite visit.

Kurt Mosley and Phil Miller of Staff Care visited several of the MCHC sites Tuesday, January 10, as part of an interview with Dr. Breeding. Staff Care is a medical placement and recruiting company based in California that specializes in Locum Tenens staffing and in placing medical personnel in rural areas. Locum tenens is a Latin phrase that means “to hold the place of, to substitute for”. In the early 1970s, a federal grant was awarded to the University of Utah for providing physician staffing services to rural health clinics in medically underserved areas of the western United States as part of the Locum Tenens ideal.

Miller said that Staff Care established the Country Doctor of the Year Award in 1992 as a way of giving back to rural physicians and recognizing their continuing contribution to rural healthcare. The award is presented each December to a physician who best exemplifies the spirit, skill and dedication of America’s rural medical practitioners and nominations are solicited nationwide.

Miller said the award has gotten quite a bit of publicity recently, with coverage in USA Today and award recipients appearing on the Today Show on NBC. Two of the prior recipients are also from Kentucky. Claire Louise Caudill of Morehead was chosen in 1997. Caudill, who delivered more than 8,000 babies during her 50- year career, is locally known as the “Mother of Morehead”. She was instrumental in establishing the St. Clair Medical Center there.

Dr. Paul F. Maddox of Campton received the award in 1999. Maddox continued to care for his community even after being diagnosed with cancer, scheduling patients around his daily chemotherapy sessions.

Dr. Breeding is a native of Letcher County and attended Whitesburg High School. After finishing his studies at the University of Kentucky, he attended UK Medical School and returned to Whitesburg to serve the people of the region at MCHC. Since that time, he has been instrumental in MCHC becoming one of the leading rural medical centers in the country, and has also become a leading citizen in the county, as well as a leader in the medical community.

Miller and Mosley attended a dinner on Tuesday evening that was held at the MCHC conference room on the Whitesburg campus.

The winner of the award will be announced later this year.