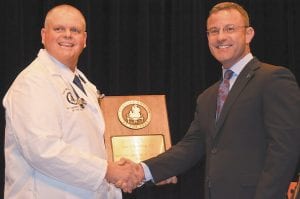 Dr. Van Breeding is presented with the “Country Doctor of the Year Award” by Sean Abner (right), president of the firm Staff Care. (Photo by Connie Hall Fields)

Staff Care is a medical placement and recruiting company based in California that specializes in Locum Tenens staffing and in placing medical personnel in rural areas. Locum tenens is a Latin phrase that means “to hold the place of, to substitute for.” In the early 1970s, a federal grant was awarded to the University of Utah for providing physician staffing services to rural health clinics in medically under-served areas of the western United States as part of the “Locum Tenens” ideal.

Staff Care established the Country Doctor of the Year Award in 1992 as a way of giving back to rural physicians and recognizing their continuing contribution to rural healthcare. The award is presented each December to a physician who best exemplifies the spirit, skill, and dedication of America’s rural medical practitioners and nominations are solicited nationwide.

Ebner said he would use Breeding’s own term, “Hillbilly High Tech” to describe the care he provides at MCHC, and added that while he would not ordinarily use a pejorative like hillbilly, Breeding calls himself a hillbilly with great pride as a symbol of the independence and innovation of the mountains. He praised Breeding for his innovative approach to medicine which includes prescriptions for vegetables for a healthy diet from the Letcher County Farmers Market and said Breeding personifies the term “Hometown Hero.” Ebner added that Dr. Breeding’s workday begins when he arises at 4:00 A.M. and he sees at least 40 patients a day, with no regard as to their ability to pay, and said the rate of 40 patients a day is twice the national average.

A number of people praised Breeding at the presentation ceremony, which was held at Letcher County Central High School Auditorium, but no one’s words meant more that those that came from his wife Pauletta and his daughters, twins Cassidy and Kennedy, and older sister Vannah. Pauletta said that after all their years of marriage, she is still awed by his work rate and dedication. The three girls read a poem called “My Daddy – MD,” in which they said they were filled with pride when he signed his name on their papers and documents as Van Breeding MD, because they all knew it meant” My Daddy.” Vannah added that Dr. Breeding had promised her he would get his hair cut into a Mohawk and dyed blue if she scored 20 points in a high school basketball game, and when it happened, then “your Country Doctor of the Year has had a blue Mohawk.”

Van Breeding told the audience that he got his work ethic and morality from his parents, a coal miner and a school teacher, who raised him to work hard and have compassion. He said that MCHC is like a quilt made of one continuous thread stronger than Kevlar and that “Appalachia makes us strong.”

He closed his acceptance by saying, “we’re in a time of crisis and health care is uncertain. Rise and stand up. Health Care is a right.”

“ You make me proud to be the governor of Kentucky,” Bevin told Breeding.