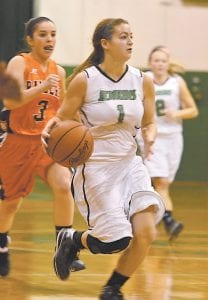 The Lady Cougars’ final round was played Dec. 30.

The Lady Cougars will very quickly have to get back in the gym to prepare for their next game at district rival Knott County Central in Hindman on Jan. 4. The Lady Cougars visit June Buchanan School Jan. 6 and play at Harlan Jan. 9 before finally hosting East Ridge on Jan. 11.

In their opening round of the Beech Holiday Tournament Dec. 27, the Lady Cougars not only managed to survive a scoreless third quarter, but rallied from 11 points down in the fourth quarter to edge Station Camp 37-35 for the victory.

According to a team spokesman, the Lady Cougars never quit and fought hard to come from behind for the win. Junior guard Cheyanne Stidham scored 10 of her game-high 17 points in the final quarter — including connecting on seven-for-seven pressurepacked free throws. 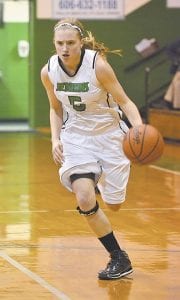 LCCHS led Station Camp 4-1 after the first quarter and 19-14 at the half. Station Camp then outscored LCCHS 16-0 in the third quarter to take a 30-19 lead into the final quarter.

According to the team spokesman, the Lady Cougars rallied by picking up their defensive intensity and made their full court pressure defense create some easy baskets.