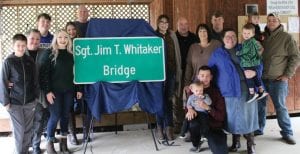 The state of Kentucky has posthumously named a bridge on new U.S. 119 at Ovenfork for Letcher County veteran Jim T. Whitaker.

Whitaker, who died October 6, 2016, was born in Whitesburg, grew up at Eolia, and served for a year in Vietnam. He was a recipient of the Bronze Star and the Purple Heart.

Whitaker also helped others start a Boy Scout troop in Eolia to help young boys in the area have something positive to do. He was a member of Blair Chapel Church.

Whitaker was born on March 23, 1945 in Whitesburg, a son of Jim T. Whitaker and Cuba Fern Caudill Whitaker. He had two brothers, John Wayne and Joe Allen, and five sisters, Maewood, Linda, Julia, Carolyn and Betty.

Jim Whitaker’s family ran a store, and his father died when he was 13. His daughter Teresa Halcomb said he would walk across Scuttle Hole Gap as a child to spend time with his grandfather on Little Cowan and talk about politics, government and history.

Whitaker married Doris Shepherd on June 28, 1966, and shipped out to Vietnam the same year.

He served in the First Cavalry Division Air Mobile B2nd/5th stationed in An Khe Vietnam from 1966 to 1967, and was awarded the Bronze Star, a Purple Heart for injuries received in combat, the National Defense Service Medal, Vietnam Service Medal, Army Good Conduct Medal, and the Military Merit Medal.

On their 50th wedding anniversary in 2016, Jim T. and Doris took the whole family to Panama City Beach, Fla., where he remembered visiting with his father when he was 3 or 4 years old.