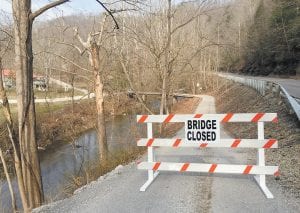 State highway officials have ordered closed the county-maintained bridge over the North Fork of the Kentucky at Holbrooktown, near Sergent. Letcher County Judge/Executive Jim Ward said the county was told it would lose its share of federal and state highway funds if it insisted on keeping the bridge open after it had declared too dangerous for traffic. Until the bridge is replaced, which could take up to one year, Holbrooktown residents are using a detour road made from a right of way the L&N Railroad abandoned and sold many years ago.