A bridge on U.S. 119 at Partridge, near the Letcher -Harlan county line, has been named in honor of former Kentucky State Police Trooper Roger Wayne Collier.

About 50 people attended the unveiling of a sign that honors the late Collier for his long career in public service. Onlookers included many current troopers from the Hazard and Harlan state police posts along with members of the Letcher County Sheriff ’s Department, the Cumberland River Volunteer Fire Department and family and friends.

Before entering police work, Collier, who died in 2000, was a sergeant in the U.S. Army. In addition to working as a road trooper, he was a driver’s license examiner, a detective with the state police special investigations unit, a member of the Kentucky State Police Honor Guard, and an investigator with the state revenue cabinet.

During the event, tribute was paid to veterans of the Cumberland River area, as the names of more than 100 vets were read aloud. 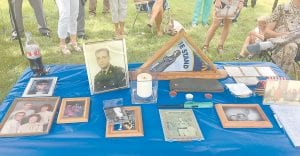 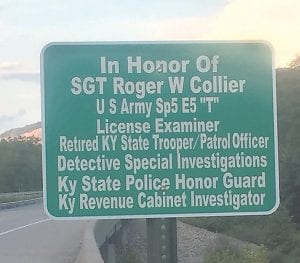