“They got their Sasquatches, they got their Coachellas, but they don’t got their Bonnaroos.” These words were said by Young the Giant front man Sameer Gadhia during the band’s set at Bonnaroo on the Sunday that ended the festival. While Gadhia was trying to compare the music festival where he was playing to others, he was at a loss for words because Bonnaroo is unlike any other festival of its time.

The four-day festival not only packs every day with 24 hours of music, but also art appreciation. This Mecca of music takes place on a 700-acre farm in Manchester, Tennessee every June and attracts enthusiasts from all around the world. All 80,000 attendees come together to become “Bonnaroovians.” Despite the very diverse individuals that make up the Bonnaroo population, it’s not uncommon to find them high fiving, dancing, and discussing their favorite bands with new acquaintances. 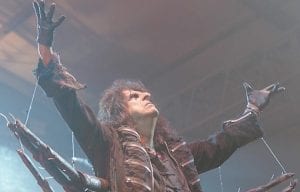 Alice Cooper was among the old pros who performed outstanding sets at Bonnaroo 2012 earlier this month. (AP)

Thursday, June 7 marked the first day of Bonnaroo and though the two main stages were yet to be open, great acts from around the world were found playing under three tents ironically named “This,” “That” and “The Other.” Among these acts were indie rockers, EMA, The Lonely Forest, and Dale Earnhart Jr Jr, rap artists Danny Brown, Yelawolf and Kendrick Lamar, and bands that embraced their southern Tennessee surroundings like The Dirty Guv’nahs and The Applebutter Express.

Though all of Thursday’s acts were Bonnaroo-worthy the stand out performance of Thursday night was the Alabama Shakes. As they sang songs such as “Hold On” and “Hang Loose” they had the packed “This” tent clapping and dancing to their retro rock sound.

Bonnaroo’s acts in the tents such as Electric Guest, Ludacris, Two Door Cinema Club, Fitz and the Tantrums, Dawes, and St. Vincent. Smaller stages named “The Great Taste Lounge,” “Café Where,” “The Solar Stage,” and “The Sonic Stage” provided up and coming band with their own platform. Among these acts were Moon Tax, Chappo, and Oberhofer. Larger stages named “The Which Stage” and “The What Stage” brought more well known acts into the spotlight including The Kooks, Needtobreathe, Foster the People and The Avett Brothers.

Bonnaroo also offered a comedy tent with headlining comedian Aziz Ansari taking the stage for two sold out shows on Friday evening. When most tents were coming to a close for the evening, a majority of the Bonnaroovians were making their way over to the “What Stage” for that night’s headliner, Bonnaroo alumni Radiohead. With their performance on songs such as “Lotus Flower” and “House of Cards” it was easy to see why this British band was so popular among the Bonnaroo attendees.

Though lack of sleep was beginning to set in, the tired fans took on the Bonnaroo state of mind and continued to share good vibes and positive attitudes on Saturday. During this day a wide range of world-renowned artists graced not only the large stages, but also the tents. These acts included The Temper Trap, Santigold, The Roots, actor Donald Glover’s rapper persona “The Childish Gambino,” and recent Rock and Roll Hall of Fame inductees, The Red Hot Chili Peppers.

The Chili Peppers played a jam worthy two-hour set where they brought out old songs including “Under the Bridge” as well as new songs like “Look Around.” Creating a united singalong with all 80,000 festival goers, it was obvious why the band has sold out a majority of the arena tour they recently embarked on.

After the Chili Peppers closed the “What Stage” for the night, fans made the journey across the field to where the tents were located. There they found themselves being pulled into the dark and shocking stage show of Alice Cooper’s midnight set. Singing hits such as “No More Mr. Nice Guy” and “School’s Out,” the rock legend made sure to pull out all the stops while bringing a live snake on the stage and the life-size guillotine where he performed his infamous stunt. Though these acts alone shocked the crowd, the most surprising trick came during the encore when Cooper, acknowledging the mostly young crowd, finished his show by covering Lady Gaga’s “Born This Way.”

When the show was over and fans were covered in confetti, they made their way to the “Which Stage.” There they continued to exhibit their positivity despite lack of sleep while dancing to beats provided by Grammy-winning dubstep DJ Skrillex until 3:30 am.

The last day of Bonnaroo provided the sleep-deprived attendees with relaxing artists such as City and Colour, Bon Iver and The Civil War. Harder sounds were available for the more energetic fans including FUN., Young The Giant and Grouplove. Though shows by these acts were heavily attended, the most anticipated performances of the day belonged to the more experienced groups. None of them disappointed. During an afternoon set by Kenny Rogers, Lionel Richie made a surprise appearance and treated the fans with a few songs. Kenny Rogers later repaid the favor by making an appearance onstage during the highly anticipated four-hour closing set that belonged to Phish.

Despite debate, the most worthwhile set of Sunday featured The Beach Boys. During their hour and a half set, they proved that their sound hadn’t changed a bit as fans sang along to their classicspacked set despite the rain. The defying moment of this set was when the group broke out into their 1966 hit “Good Vibrations.”

Though the majority of the crowd wasn’t even been born anytime close to the song’s release, they completely related to the song because they had been sharing good vibrations through all four days of the festival and will continue to ooze positivity throughout the year leading up to the next Bonnaroo — proving that the event is much more than a festival held in the middle of nowhere. It is a state of mind.

This state of mind was described best by Red Hot Chili Peppers’ bassist Flea when he took the time out of the band’s set to say, “I feel peace and love and goodness and kindness everywhere I walk here!”

“Turn Off This Song and Go Outside” — The Lonely Forest

“By The Way” — The Red Hot Chili Peppers

“My Body” — Young The Giant