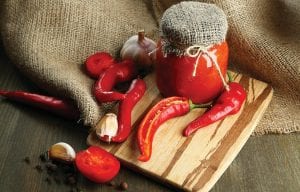 Peppers like the Caribbean Red Pepper and Scotch Bonnets add heat to the hot sauce that will make your dad’s mouth water, his ears pop and his body temperature rise.

Sonara Smart Dodd was raised by her father, a widower with six children. Dodd wanted to honor her father and fathers everywhere by establishing an official equivalent to Mother’s Day. She went to local churches, the YMCA, shopkeepers and government officials to drum up support. However, her campaign to celebrate the nation’s fathers did not meet with the same enthusiasm as Mother’s Day. As one florist explained, “Fathers haven’t the same sentimental appeal that mothers have.”

Because of Dodd’s persistence, the nation’s first Father’s Day was celebrated on June 19, 1910, in Spokane, Washington. Slowly, the holiday spread from state to state. It wasn’t until 1972 — 58 years after President Woodrow Wilson made Mother’s Day official — that the day honoring fathers became a nationwide holiday in the United States.

If your go-to gift for Father’s Day is a tie, socks, shirt or other article of apparel, on behalf of dads everywhere, please try something new! A spicy, signature homemade hot sauce is a great way to heat up Father’s Day! You also can start a tradition of presenting a new bottle each year of custom-made hot sauce.

The trick to the perfect hot sauce is using a combination of peppers with a balance of sweetness, fruit and heat. Peppers like the Caribbean Red Pepper and Scotch Bonnets will add heat to the hot sauce that will make your Dad’s mouth water, his ears pop and his body temperature rise. Combining different types of peppers with vegetables like carrots will add sweet, fruity and flavorful notes to your homemade hot sauce.

Using your computer or supplies from the arts and crafts store, create a special label for your dad’s custom Father’s Day Fiery Hot Sauce made using the recipe below. You can find beautiful but inexpensive decorative glass bottles at discount stores. Tie a ribbon on your gift bottle, and a new Father’s Day tradition is born!

Adjust the heat and spiciness of the hot sauce by removing the interior membrane of the pepper and using some or all of the seeds along with the flesh. Do not touch your face, eyes, nose or mouth when handling hot peppers. Be sure to wear rubber gloves, or wash your hands thoroughly after chopping hot peppers.

1. Heat the oil in a large saucepan over mediumhigh heat. Add the onions and salt, and cook for 3-5 minutes until the onions begin to soften. Add the peppers, garlic and carrots. Cook, stirring, until the onion begins to brown, about 3-4 minutes. (Note: This should be done in a very well-ventilated area! The fumes from the cooking peppers are strong, so do not lean over the pot or you may inhale the acrid steam.)

2. Reduce heat to medium. Add in the tomatoes and sugar or stevia. Bring mixture to a boil. Then, lower heat to medium. Continue to cook, stirring occasionally, until tomatoes begin to break down, about 15 to 20 minutes.

3. Remove from heat and allow mixture to steep until it comes to room temperature. Carefully transfer the pepper mixture to a food processor or blender. (Use caution when pureeing hot ingredients.) If you’re using a blender, place the lid on loosely and cover it with a dish cloth to allow any steam to escape. Puree the mixture for 15 seconds. With the food processor or blender running, add the vinegar in a steady stream through the feed tube or the opening in the lid.

4. Puree until smooth. Set a fine-mesh sieve over a medium bowl; pour the pureed mixture through the sieve, gently pushing on the solids with a wooden spoon to extract all the liquid. (Discard solids.) Let the sauce cool to room temperature, about 1-1/2 hours. Taste and season with more salt, if necessary.

5. Transfer the hot sauce to a sterilized glass pint jar or bottle and secure with an airtight lid. Refrigerate. The hot sauce tastes best when aged for at least 7-10 days. Shake the bottle to recombine the liquid before using. Can be stored in the refrigerator for up to 6 months. Makes 1 pint.