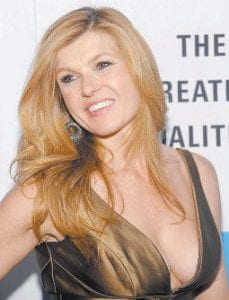 Actress Connie Britton was photographed in January at the Creative Coalition Inaugural Ball at the Harman Center for the Arts in Washington. (AP Photo)

Early this season on “Friday Night Lights,” a sportscaster declares with a hearty twang that everyone gathered for the Panthers’ football game is “exactly where God wants you to be.”

It’s not hard to imagine a similar sense of calling among everyone who watches “Friday Night Lights.”

Airing Friday at 9 p.m. on NBC, this uniquely down-to-earth drama has always seemed sort of heaven-sent. Embedded in a small Texas town where the locals attend church but worship at the altar of high school football, “Lights” stars Kyle Chandler as Coach Eric Taylor, a father and family man, and Connie Britton as his wife, Tami, who, besides co-parenting a baby and teenage daughter, this season came aboard as Dillon High School’s principal.

Dillon, Texas, has a crisp specificity on “Lights,” but, even so, it occupies a sprawling common ground with its audience. Here’s an everyday world, beautifully observed, that’s familiar to viewers from their own experience.

“It’s important for us to show all the elements of being in a community in a very real way, without commenting on it or judging it, but just letting these characters exist in it,” says Britton, who spent her childhood in the community of Lynchberg, Va.

She starred with Michael J. Fox for five seasons on the sitcom “Spin City,” and was a regular on “24.” After playing the coach’s wife as a marginal figure in the 2004 feature film “Friday Night Lights,” Britton returned for the series to claim equal status with Chandler as TV’s most deliciously authentic married couple, and the nucleus of a sizable ensemble cast.

The Peabody Award-winning “Lights” does a neat trick, exploring a football-crazy town without resorting to stereotypes. There are hot-looking teens, feisty older folks and a range of other welldrawn Dillon residents. But Eric and Tami provide the loving narrative core. They ground the series’ action and each other, while they face their share of squabbles.

“When you have disagreements in a relationship that is otherwise solid, and tap into them — that’s really fun for us as actors,” says Britton, “and I think it’s fun for the audience to watch.”

The series is shot on location in the Austin area, where the actors can immerse themselves in the truth of what they’re bringing to life.

“We’ll never run out of stories to tell,” says Britton, “and they’re always simple stories. That’s why they resonate with people so much.”

Resonate is right. “Lights” viewers don’t simply like the show, or even love it; the emotions they have go beyond that. While they’re watching “Lights,” they may feel the odd sensation that they’re exactly where a higher power wants them to be.

No wonder fans can’t understand why so many other people have resisted the show’s blessings.

And no wonder they (make that “we”) are feeling another onset of “Lights”-out anxiety as the current season (its third) absorbs us, while, at the same time, the absence of a bigger audience serves as our gnawing reminder that the show, no matter how good, has to struggle to stay alive.

“Clear eyes, full hearts can’t lose” — that’s the watchword of the Dillon Panthers. It could also speak for the series, which lives on thanks to the full-hearted fan base and a network that, so far, has refused to give up.

A year ago, despite its lessthan robust weekly 6.2 million viewers, the show won its latest pickup from NBC, which announced an unusual cost-sharing deal to premiere the new season on satellite service DirecTV.

There were hopes that, by airing on an additional outlet with all the bonus hoopla, the show might finally break out as a ratings champ.

Alas, the audience on NBC thus far is confoundingly smaller than last year’s. This begs the question: What would it take to jolt more viewers into watching?

But the game isn’t over. Four episodes remain, with the season finale airing April 10. And though representatives of NBC and DirecTV say no deal has yet been struck to continue “Lights” for Season Four — well, they are voicing hopeful talk. Clear eyes, full hearts can always find a plan.

The current season of “Lights” did well last fall on DirecTV, says Eric Shanks, its executive vice president of entertainment. The 13 episodes averaged 600,000 viewers a week among DirecTV’s universe of 40 million.

“But we’re not in the ratings business,” Shanks notes. “We’re about attracting new customers and making our existing customers happy.”

Meanwhile, NBC has made a lot of viewers happy with its continuing support of “Lights.”

But why won’t even more viewers get happy? True, you enter Dillon as a viewer, you feel things more intensely than with most shows. Is there something too upclose, too touching, too emotionally honest about “Lights” for some people?

Or is that just what they think?