Broken arm got in way of perfection 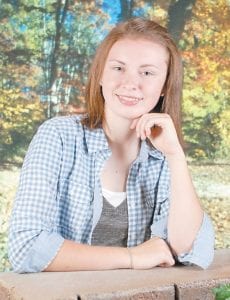 Emily Blair attended classes every day but one while making her way through the Letcher County school system. Her only miss came as a firstgrader when she was in the hospital having her broken arm set.

On the first day of school a handful of children cry and say that they want to go home. This is expected.

What’s not expected is for a student to have missed only one day of school during 13 years. Among the few in this category is Emily Blair, a Letcher County Central High School senior whose only absence came as a first grader at West Whitesburg Elementary School.

“I decided to be Evel Knievel on the monkey bars and skipped about three bars and fell right on my arm,” said Blair.

Blair broke her arm on a Tuesday right before the school day ended. Her parents took her to the Hazard hospital for surgery.

“She woke up the next morning and asked us what time it was,” said Melissa Blair, her mother. “When I told her it was 8 something, she was coming out of her bed saying you have to take me to school. I told her she couldn’t. The doctor hadn’t released her yet and she cried. On Thursday, she was back in school.”

Melissa Blair said her daughter wouldn’t have missed that one day if her arm wasn’t broken so badly.

“I cried,” said Emily Blair. “I just felt like I was going to miss something.”

Miss Blair did get sick from time to time as the years went by, but it never stopped her from going to school.

“She would get sick on the weekends every now and then with a stomach virus, but was fine on Monday mornings,” said Melissa Blair. “She would get sick with a sinus infection or something and Dr. Van Breeding would take care of her.”

During her senior year at Letcher County Central, Emily became so sick that she required six days of intravenous (IV) therapy to get better. Still, she didn’t miss classes.

“I went to school and toughed it out,” she said. “I was determined.”

While at LCC, Miss Blair ran cross-country for two years, played basketball for five years and was on the softball team for six years.

In addition to having 12 years of perfect attendance, Miss Blair was never tardy.

She even made it to class on time the morning after the LCC Lady Cougars were out late celebrating the 14th Region basketball championship.

“Even if I got home after midnight, I got up at 6 a.m. and came in right on time,” she said. “People probably think I am crazy.”

She drove to school her senior year and most days drove her brother, Adam Wayne, to kindergarten at West Whitesburg Elementary.

For her accomplishment, Emily has received a $250 scholarship from the Kentucky Directors of Pupil Personnel.

“It’s rare,” said Kenny Cornett, district director of pupil personnel. “For her missing only one day that is good.”

Emily said her mother and father, Sean Blair, never forced her to go to school against her will.

“I just loved to go to school,” she said. “I just had the willpower to go to school and be something when I got big. I just wanted to learn as much as I could.”

She said that even when she would go on a class field trip she always felt she was missing out on things going on at school, particularly being around her friends.

Emily has received a Commonwealth Scholarship to attend Morehead State University. She had a 4.5 grade point average at LCC and scored a 28 on the ACT. She will study to become a nurse anesthetist.

“I’m really proud of her,” her mother said. “She has worked really hard and it has paid off. She is just a really tough girl. She never lets on about anything unless it’s really bad.”