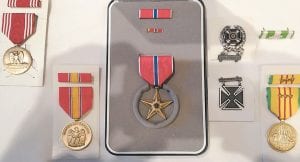 The Bronze Star Medal earned by Letcher County Sheriff Danny Webb can be seen in the center of this photo showing other medals and awards he earned while fighting in Vietnam. The medal arrived last week as a replacement for one lost in the mail shortly after Webb earned his release from the Army.

“It was very emotional because it brought back memories,” said Webb. “That was a big part of my life at that time. It was special to get that.”

As an Army tank supervisor, Webb was issued the fourth-highest individual military award for heroism in a combat zone while serving in Vietnam. In 1969, Webb received a package that contained the citation for the medal, but not the medal itself.

“The envelope was real big and torn and the Bronze Star was missing,” said Webb. “It had the combat medals and everything listed on the DD214,” the certificate of release or discharge from the Army.

Last summer, Webb contacted the U.S. Department of Veterans Affairs, but didn’t expect that he would ever receive the actual medal in addition to the original certificate.

“It’s good to have [them] for grandkids and to pass on,” he said.