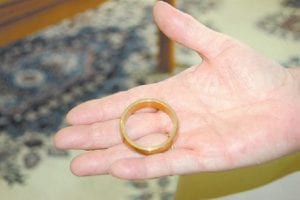 An Isom woman wants a life-size statue made of her giant great uncle, who was seven feet, nine inches tall and weighed more than 500 pounds.

Maxine Bates Quillen, fundraising chair of the Letcher County Historical Society, is trying to raise $84,000 to have a bronze statue made of Captain Martin Van Buren Bates, who was born in Kona in 1837.

“He was just a big man,” said Quillen. “He got very famous.”

Bates was the youngest of 11 children born to John and Sarah ‘Sallie’ Waltrip Bates. Quillen said Martin Bates, who was known as the Kentucky Giant, was six feet tall and weighed about 300 pounds at age 11. She said he didn’t stop growing until he was 28 years old.

In 1864, Bates joined the circus and met Anna H. Swan, of Nova Scotia, who was seven feet, 11 inches tall. They traveled in England, Canada and the United States while they worked for the circus. Quillen is proud that Queen Victoria paid for their London wedding on June 18, 1871 and gave Bates a gold watch and his wife a diamond ring. 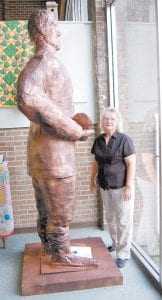 Maxine Bates Quillen stood beside a papier-mâché statue of Captain Martin Van Buren Bates. An art class at Letcher County Central High School made the structure, which is located at the Harry M. Caudill Memorial Library.

The couple still hold the record for tallest couple in the Guinness Book of World Records. Anna Bates also holds a world record for giving birth to a boy weighing 23 pounds, 12 ounces and being 30 inches long at her home in Seville, Ohio on January 19, 1879. The baby died 11 hours later.

On Nov. 1, 1861, Bates enlisted in the Confederate Army, Company F of the 5th Kentucky Infantry under Colonel Ben B. Caudill for one year. As a first lieutenant, Bates served in Company A of French Battalion of Virginia Infantry. Bates became a prisoner of war in Camp Chase, Ohio after he was taken captive by the Union Army in Pike County. After escaping Bates served under Lt. Col. Clarence Prentice in Company A of the 7th Confederate Calvary with his brother, Captain Robert Bates, who was Quillen’s grandfather.

“He was probably the most well known figure at the turn of the century,” said Dr. David Narramore, chairman of the Letcher County Tourism Commission.

The Letcher County Tourism Commission obtained a $10,000 grant from Berea College’s Brushy Fork Institute to complete a study on how much it would cost to have a bronze statue made of Bates and build a welcome and history center on the Whitesburg bypass.

Part of the grant was used to fund the creation of a papier mâché statue of Martin Bates holding his pocket watch by an art class taught by Doug Adams at Letcher County Central High School. Narramore said the papier-mâché structure was made to give the public an idea of what the statue would look like. The piece is located in the front window of the Harry M. Caudill Memorial Library on Main Street in Whitesburg.

“This is going to introduce him to everybody,” said Quillen. “When you come in and actually see it, it makes it more real.”

Quillen would like to place the statue on the Whitesburg bypass overlooking the old Whitesburg High School football field where the Battle of Whitesburg took place.

“ The community support for the Martin Van Buren Bates statue has been overwhelming with over 100 different donors from within Letcher County and the surrounding areas that have donated various amounts in what they have deemed such a worthwhile cause,” said Narramore.

Narramore said the study examines the feasibility of placing the statue on the bypass as well as building a history center with exhibition room for rotating exhibits. Plans would also call for access from the walking track to the proposed Monument Park. The center would require additional funding.

Quillen said more statues of prominent Letcher County figures will be made as funding becomes available. The Letcher County Historical Society is selling brick pavers for $100 a piece to place around the giant statue.