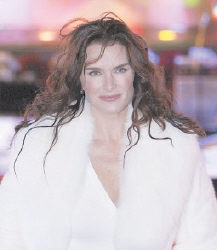 Brooke Shields hopes “Lipstick Jungle,” her new show, will convince women that they should not be afraid to want it all.

“If it’s a family and a career, why not?” she added. “It may not be easy, but we don’t have to apologize for at least wanting the most of what is available to us.”

Along with co-stars Kim Raver and Lindsay Price, Shields appeared on a broadcast at New York City’s Rockefeller Center tree lighting ceremony last week to announce that the NBC television series will appear Thursdays at 10 p.m., beginning Feb. 7. Based on a book by “Sex and the City” author Candace Bushnell, “Lipstick Jungle” will take over the time slot that has been held by “ER.”

Raver – who played Audrey Raines, counterterrorism agent Jack Bauer’s ill-fated love interest on “24” – said the show would address the difficulties that come with striving for personal and professional fulfillment.

“It’s also trying to figure out how to have that balance, and how to have the balance between the friendships and the husbands and the boyfriends and the family,” she said. “It’s what everyone is dealing with every day.”