Brooks afraid Gators will be looking for bait 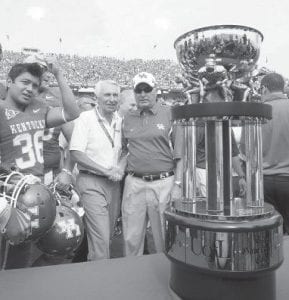 It started ugly with two blocked Kentucky punts and barely improved during a 63-5 rout by the eventual national champions in Gainesville.

“That is the worst loss I’ve ever had in my life,” said Cobb, who subbed in as quarterback in that game but will start at receiver in Saturday’s rematch. “All through high school, all through middle school, Pop Warner — I’ve never lost a game like that. I guess I know how it feels now. I’m going to embrace that in this game.”

Yet if the Wildcats are determined to avenge a blowout loss, Kentucky coach Rich Brooks is fearful the Gators might be hungry too following a narrower than expected win.

On Saturday, the No. 1 team in the country was largely held in check by Tennessee’s defense. The Gators still won, but it was only 23- 13 — less-lopsided than anticipated.

“It seems like we always get them when they’re mad,” Brooks said Monday during his weekly news conference. “They didn’t light up the scoreboard like they’re accustomed to lighting it up, so I’m sure they’re going to want to come in here and show everybody their offense is still very explosive.”

It’s one thing to have motivation to beat a team that boasts the nation’s longest winning streak of 13 games. It’s another to believe victory is achievable, and Brooks was surrounded by plenty of visual evidence Monday as he stood at the podium inside a Commonwealth Stadium conference room. Around the room were photos of the last time the Wildcats knocked off a No. 1 team — two years ago in triple-overtime against LSU.

“People are comparing the two games and the two teams,” offensive guard Christian Johnson said. “I think they’re different teams, but at the same time we’re a different team. No team is unbeatable.”

Running back Alfonso Smith believes Florida can be beaten too, even though it hasn’t seemed like it lately.

“I don’t think any team is totally invincible, but they have proven to be unbeatable right now since the Ole Miss loss,” Smith said. “I don’t really want to remind them of that.”

“Much of what they did Florida was not prepared for,” Brooks said. “I think they’ll be more prepared in the future.”

Brooks once wondered aloud whether Tebow could pass as well as he can run. He says he no longer has those questions.

“I found out that he could,” Brooks said. “Hey, the guy can throw. The big problem is with all the things they do, he has a lot of time to find his open receiver.”

And on the other side of the ball, Florida’s defense returns plenty of talent from a year ago — when it was one of the country’s most dominant units.

“The second string could probably play anywhere else in the nation right now,” Cobb said. “That just shows how much depth Florida has.”

Like Florida, Kentucky disappointed somewhat Saturday with its narrow margin of victory against Louisville. Brooks says he wasn’t discouraged by that as far as building momentum goes, considering the Wildcats overcame three third-quarter turnovers to beat the Cardinals.

He knows, however, that giving Florida extra chances and an early lead would be fatal.

“They’re a team that once that truck starts rolling down the hill loaded with rocks, it can crush you,” Brooks said. “You need to hang around. You need to not get a lot of separation. Whatever that takes, we’ve got to do it.”