Brooks is making sure Wildcats worry only about beating Vols 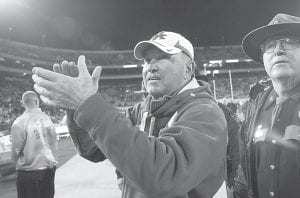 Rich Brooks isn’t ready to talk about the future. The present is more than enough for the Kentucky coach to handle right now.

Coming off the first win at Georgia in more than three decades, Kentucky (7-4, 3-4 SEC) can put together its best finish ever in the SEC East with a win over rival Tennessee (6-5, 3-4) on Saturday.

The win would also give the team’s 26 seniors a proper sendoff in their final home game and significantly brighten Kentucky’s bowl prospects.

It’s a lot to think about. Brooks can hardly afford any more distractions, especially when talk turns to his future.

Asked if this would be his last season at the helm for the Wildcats, a visibly agitated Brooks demanded that no more weight be put on the minds of his players.

“One of the things that bothers me most are the distractions,” Brooks said hotly. “I don’t need any more distractions on us this week. I want it about Tennessee.”

Fresh off a historic win over Georgia — Kentucky’s first win between the hedges in 32 years — Brooks said he is working on getting his team focused to win just another game, and wasn’t looking past Saturday’s matchup.

“All I know is that a victory would put us second in the SEC East and with that comes a little different (bowl) picture,” he said. “If we lose, we’re back in the lump, tied for fourth.”

Getting his players to discard any other thoughts and buy into his “right here, right now” mentality has been relatively easy, he said.

“All I need to mention is second place in the SEC East and the rewards that come with that,” Brooks said.

A win against Tennessee would highlight the careers of the Wildcat seniors who have helped change the stature of Kentucky football, Brooks said.

No Kentucky team has ever finished higher than third in the current SEC league alignment, which went into effect in 1992.

Senior defensive tackle Corey Peters said the players understand what is at stake but are not getting too caught up in it.

“All our focus is on Tennessee,” Peters said. “If we beat them, then everything else will take care of itself.”

Sophomore offensive guard Stuart Hines said the team has been able to buy into Brooks’ calls for focus.

“We really aren’t talking about the bowl or (second place),” Hines said. “We don’t have control of anything else except winning or losing.”

Still, both players said their coach’s possible retirement status was also on their mind.

“Obviously he won’t coach many more and we want to send him out good with a strong year,” Hines said.

Brooks did cite the historical context of beating Tennessee, explaining that the win would show the SEC that Kentucky was no longer the league’s whipping boy.

“The knock has been that we’re a bottom feeder,” Brooks said. “(Second place) would put us ahead of historically better teams.”