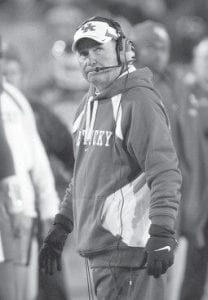 Kentucky’s quarterback options may change from what head coach Rich Brooks calls a threeheaded monster to a four-headed monster.

Brooks said injured starting quarterback Mike Hartline will return to the practice field for limited activity, three weeks after suffering a knee injury that has left little continuity in the position ever since.

Brooks said that Hartline’s status was fluid and he wasn’t sure when he’ll be available.

In the absence of Hartline — who started the first four games — Kentucky has rotated between backup Will Fidler, true freshman Morgan Newton and receiver Randall Cobb running a spread offense.

This quarterback rotation showed weaknesses in the 31-24 loss to Mississippi State, as Newton threw a costly interception and was unable to convert on critical third down plays, and the Wildcat formation under Cobb at times collected negative yardage.

Still, Brooks blamed the loss not on quarterback play, but a lack of focus from his entire team, specifically the defense. Mississippi State’s Anthony Dixon ran for a school-record 252 yards against the Wildcats.

“We went through two games with the three-headed monster and it worked out,” Brooks said. “(Against Mississippi State) what we did didn’t work because our defense didn’t work. If it had, things would have been different.”

Brooks hailed Newton’s passing and decision-making throughout the game and said it was an improvement, despite the loss.

“He showed some pretty good poise,” Brooks said. “He did some good things. I think it was a step forward. But he still is on a steep learning curve.”

Brooks said he didn’t use Fidler in the quarterback rotation against the Bulldogs because Newton looked to be in control.

“We wanted to keep going with (Newton) to get some continuity,” he said.

Brooks also blamed himself for not getting his team prepared for what he had described as one of the most critical games of the season. A win would have put the Wildcats in prime position to qualify for their fourth-straight bowl game appearance.

“The focus and decision-making wasn’t there,” Brooks said. “It’s a constant challenge getting the right frame of mind before every game. I didn’t do that (this week). We’ve gone from a team that could have gone further than past teams (in the post season) to one that may be the team to snap the bowl game streak.”