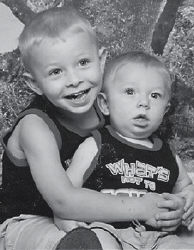 Corey Sexton celebrated his third birthday July 13. His brother, Dalton, is seven months old. They are the sons of Terry and Joni Sexton of Ermine. Their grandparents are Elmer and Ona Fay Sexton of Whitesburg, and Ottis Akers of Duffield, Va.