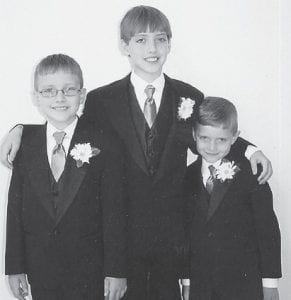 BROTHERS — Steven Tyler Hall, 10, and his brothers Zachary Clay Hall, 8, and Mason Alexander Hall, 6, were attendants in their aunt, Gina Hall Dotson’s, wedding on July 24. Tyler was a groomsman, Zach was the ring bearer, and Mason was the Bible bearer. They are the sons of Steve and Jaime Hall of Mt. Sterling. Their grandparents are Eugene and Kathy Hall of Deane, and their great-grandparents are Charlie and Wilma Holbrook, also of Deane.