Side-by-side had been stolen from Jenkins, sheriff says 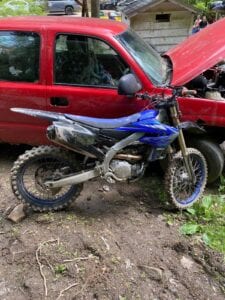 This dirt bike was stolen from the Blackey area and was recovered on Friday at Pert Creek.

Police from four agencies arrested two men and two juveniles this morning (Friday) after Jenkins man recognized his stolen side-by-side ATV sitting in a yard on Pert Creek.
Both of the adults arrested lived nearby, and had outstanding warrants related to fleeing from police. One was also charged with receiving stolen property.
Letcher County Sheriff Mickey Stines said the vehicle was stolen from Jenkins last week. On Friday, the owner drove up Pert Creek after hearing his side-by-side could be there, and recognized it sitting near the home of brothers Sherrell and Eddie Sandlin.
The sheriff’s department, Whitesburg Police Department, Jenkins Police Department and Kentucky State Police responded to Pert Creek and took two juveniles into custody for allegedly stealing the side-by-side. Stines said the mother of the Sandlins gave them permission to search that property, and officers located motorcycle that had been recently stolen from the Blackey area, a substance believed to be methamphetamine, $3,868 in cash, marijuana, and drug paraphernalia. Police also found two long guns and two handgun.
Stines said as they continued to search, they found Sherrell L. Sandlin hiding in a bedroom closet, and that he admitted to owning the items found.
Sherrell Sandlin, 40, was charged with receiving stolen property greater than $500 and less than $10,000 in value, first-degree trafficking in methamphetamine, possession of marijuana and possession of drug paraphernalia. He was also served with an indictment warrant charging him with first-degree wanton endangerment, first-degree wanton endangerment of a police officer, first-degree fleeing or evading police, first-degree escape, first-degree trafficking in a controlled substance and numerous other charges.
Those charges stem from an incident in 2018 when Sandlin was accused to backing his vehicle into a sheriff’s department cruiser driven by then Deputy Sidney Fields and then fleeing into the woods after Fields fired a Taser at him. The encounter occurred after a high-speed chase when Fields attempted to pull over a black Jeep with no license plate. Sandlin remained at large until April 2019, when Stines, four deputies and two Whitesburg Police officers surprised him while he was sleeping.
Stines said today that Sandlin was sent to drug rehab after his arrest, but ran away from there and has been a fugitive for some time.
Also arrested today was Sherrell Sandlin’s brother, Eddie Sandlin, 42. He was arrested on two outstanding warrants for probation violation in October of last year. The first warrant charges him with first degree fleeing or evading police both on foot and in a vehicle, resisting arrest, wanton endangerment of a police officer, receiving stolen property valued at $10,000 or more, and several other charges, including being a first-degree persistent felony offender. A second warrant charges him with first degree bail jumping and a second charge of being a first-degree persistent felony offender.