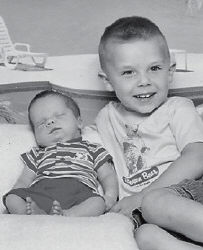 Phoenix Scott was four years old July 25. His brother, Kayden Andrew Scott, was born June 5. Their parents are Eric and Erica Scott of Defeated Creek. They are the grandchildren of the late Kay Morgan of Ingrams Creek, Terry and Vicki Halcomb of Linefork, and Stan and Kita Morgan of Virginia. Their great-grandmother is Mary Lou Turner of Linefork.