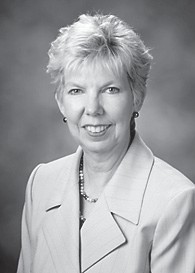 Hospice of the Bluegrass President and Chief Executive Officer Gretchen Brown is the recipient of the inaugural Galen Miller Leadership Award presented by the National Hospice and Palliative Care Organization (NHPCO) at its annual conference held last month in Washington, D.C.

The award was created in memory of Galen Miller, NHPCO’s executive vice president.

Brown has expanded hospice care and services into 32 Kentucky counties. In addition, Hospice of the Bluegrass operates inpatient units in Lexington and Hazard. Hospice serves nearly 700 terminally ill patients and their families each day.

“Not only is Gretchen a long-time hospice veteran — she is a leader in her community, state and on the national level,” said NHPCO President and CEO J. Donald Schumacher. “Her program has been at the forefront of palliative care services and serves as a model to the entire hospice community.”