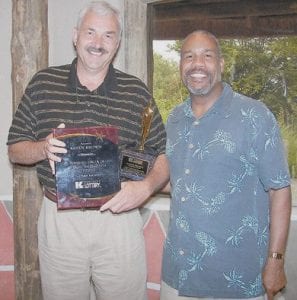 TOP SALESMAN – Randy Brown, left, was presented with an award by the Kentucky Lottery’s vice president of sales, Bob Little, at a conference in Louisville.

A Letcher County man was honored recently for being the Kentucky Lottery’s top salesman for the last fiscal year.

Randy Brown, of Whitesburg, was named the “No. 1 Sales Rep for FY ’07” at the Kentucky Lottery’s annual summer sales conference in Louisville, where it handed out awards to its sales representatives for surpassing goals set forth at the beginning of the current fiscal year.

Jeff Riley, regional sales manager for the Eastern Region said, “Randy is a veteran sales representative who uses his professional skills in building strong partnerships with his customers. This along with his outstanding personality enabled him to lead the state in this record sales year for the lottery.”

“Downtown Randy Brown,” as vice president of sales Bob Little calls him, has been with the Lottery since its start up in 1989. He covers Letcher, Harlan, Knott and Perry counties.

With sales of close to $16.5 million, Brown achieved 106.1 percent of his designated sales quota for the year, leading the state to record sales for FY 2007.

“Randy can always be counted on to be there for his retailers, and in his own humble way help them to promote their business during hard economic times,” said Little.