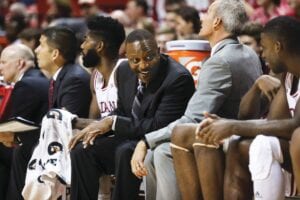 Flint has worked as an assistant coach under John Calipari before at UMass. He’s also been a head coach at UMass and Drexel and had been working as an assistant at Indiana before joining Calipari’s staff after the departure of Kenny Payne to the New York Knicks.

“I think all assistant coaches, especially with social media, have pressure because they (fans) can talk about you. If they don’t think you’re getting any players for the coach and things like that, that comes out now,” Flint said. “That wasn’t the case years and years ago when I got into coaching.

“There’s always pressure and one of the biggest pressures is to bring in players. The better your players are the better your coach is. I know that myself. I was a head coach for 20 years, so I get that part of it.”

He also gets that being at UK with the passionate fans following only intensifies that pressure not only on Calipari but also his staff members. 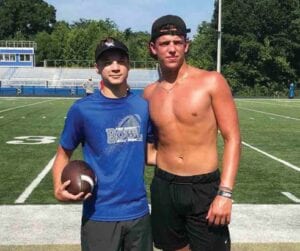 “People talk about you. They put you on social media and ask, ‘What is he doing?’ Those are the types of thing that go on down there,” Flint said. “Probably didn’t go on when I first got into coaching, but that’s part of the game now and you’ve got to deal with it.

“I think all assistant coaches, especially with social media, have pressure because they can talk about you. If they don’t think you’re getting any players for the coach and things like that, that comes out now. There’s always pressure and one of the biggest pressures is to bring in players.”

Flint has coached at schools where winning seasons were celebrated. At Kentucky, SEC championships and at least Elite Eight appearances are demanded by fans.

“I’ll be honest with you, they expected winning at Indiana. So I get that. But this is the monster that you’ve built. I mean, Cal has put that in everybody’s head because of what he’s done here, so they expect you to win because he’s treated the job that way,” Flint said. “He’s built that program to the point where everybody expects you to win.”

Flint said combine Calipari’s success with UK’s tradition and Calipari made expectations what they are now.

“His resumé since he’s been here is incredible so the expectations are going to go with it. So I have no problem with it,” the new UK assistant coach said. “That’s part of the program and you have to approach the job that way.”

Calipari’s trust in Flint obviously played a major role in why he was offered the job at Kentucky. They have talked on the phone most days for years. Not only that, but Flint is the godfather of one of UK assistant coach John Robic’s children and knows assistant coach Tony Barbee well, too.

Flint joked he got his job at Indiana because Indiana coach Archie Miller went through Calipari to approach him. That’s why Flint said Miller laughed when he called to tell him he was leaving to join Calipari at Kentucky.

“Everybody knows the relationship (with Calipari). Honestly, I just wanted to make sure that our relationship could stay the same before I came to work for him. I want us to have a good relationship. We’re best of friends and I appreciate that relationship. I didn’t want that to be messed up because I come work for him. We discussed that a little bit. So that made me a lot more comfortable,” Flint said.

“I didn’t have to leave Indiana. It’s a good job. But I wanted to keep the relationship that we had. We’re on the phone with each other almost every day even though I worked at Indiana. That was the big thing.” s

“Coaches have told me he could play college basketball if that’s what he wants to do but I have coached football as long as he can remember and he’s been on the field with us. Football is the sport he likes best,” said David Osborne, the quarterback’s father.

“He is a dual threat kid. He is pretty hard-nosed and will run almost to a fault. He will learn early not to do that as much in high school. I think he throws the ball well on the run, has a nice touch and is pretty accurate. He doesn’t realize how strong his arm is and doesn’t always trust it to cut it loose.”

He’s been to several national competitions and was the 2019 Future 4 Winner and is the No. 88 player in the nation according to QBHitList. He was selected to play in the Diamond Elite All American game in Las Vegas 2020 but could not participate due to basketball.

“He has done national showcases and competitions. We like getting out and competing to let him see where he is at,” David Osborne said.

His father says his son need to get more weight because his “metabolism never stops.” Also COVID-19 kept him from working out like he wanted.

“He also got sick in basketball and lost 12 pounds in two weeks last season but never missed a game,” David Osborne said.

Some freshmen already have Division I offers and Ross Osborne has been in touch with several schools and had others following him on social media. The family has UK football season tickets and the plan had been for him to attend camp at UK — along with several others — this summer before COVID-19 stopped that.

“For him Alabama could sit down and if (UK coach Mark) Stoops calls, that is where he would want to go to school,” David Osborne said. “But he knows coaches really are not going to talk to him until he can put some high school film out there for them to see.” s

Former Kentucky running back Benny Snell “loves” life with the Pittsburgh Steelers according to his mother, April.

“It is beautiful there. Hilly, great bridges. It’s like being in a big city. Where we live (Columbus, Ohio) is not really city-like. In Pittsburgh it is a faster pace but the people are very nice,” April Snell said. “No complaints from us.”

Snell, the Steelers 2019 fourth-round draft pick out of Kentucky, was second on the team in rushing yards with 426 yards last season when he played in 13 games with two starts. He reported back to preseason camp this year at 212 pounds, a drop of 12 pounds from last season to help improve his speed and lateral quickness.

His mother said she wasn’t positive why the Steelers wanted him to drop weight.

“I don’t get to ask as many questions as you might think about the plans the team has for him,” April Snell laughed and said. “When he was home he was very active. It’s big business to get into shape. He was also working out multiple times per day and really taking it seriously. You can see he made a transformation with his body. They wanted to see him a little bit leaner and he did it.”

“He always has goals. He just doesn’t share them,” his mother said. “It’s not so much yardage like it used to be. He has broader goals now. I can ask him but he doesn’t really tell me anything. I just find out when everybody else does.” s

Strong says one reason he was able to win nearly 550 games as a college and high school coach in part was what he learned from Rupp.

“He taught me about toughness and to stick to what is going on,” Strong said. “He was a master psychologist, too. People never gave him credit for that.

“If he wanted to put you down he would act like he forgot your name or call you by the wrong name. He might call me Jack Strong.”

“Spivey was made but Rupp knew how to get him mad to where he played even harder,” Strong said. “He would give him a B-12 shot at the infirmary the day of games to give him energy.

“Rupp would get in there before the game and point at Spivey and call him ‘big boy’ like he did not know his name. Spivey would get so mad. He would say he was Rupp’s meal ticket and he ought to act like he knows his name.”

“Coach would call him that little SOB from Mississippi State. He would never use his name,” Strong said.

Strong said after he got fired at Oklahoma State, he went to see Rupp who asked him often about former Oklahoma State coach Henry Iba.

“They were big buddies. He would ask me how Mr. Iba treated me,” Strong said. “He had a human side like that but he kept that personal. He didn’t let many people see that side of him. He didn’t want to let weak.” s

“Quinton and I have had quite a few talks,” White said. “I have very lofty expectations for what he can be for us. I will not shy away from that and he doesn’t want me to. The fact is we need more and I expect more out of him.

“It’s not about having one play or two plays a game that looks good on the highlight film. He’s got to be consistent.”

He has become one of the best interior defensive linemen in the Southeastern Conference. The 6-4, 345-pound Bohanna had 18 tackles last season and has now played in 37 games.

“He does a lot of dirty work for us. He commands a lot of double teams and keeps guys free (to make tackles). It’s just that I expect that and more,” White said. “He can push and hold the point but I want more out of the pass rush from him. He has enough twitch and short area burst to where he can affect the passing game. There will be times when he gets one-on-one and when he does there should be nobody who can block him.”

“Q’s a great athlete for how big he is, he can move, he can do it all. He has great technique with his hands, he can swing over you. He has good hands, good power,” Kinnard said. s

Quote of the Week: “Yesterday’s practice reminded me of a practice about four or five years ago where you would drive and two players would block your shot. Like, bam, bam. I laughed and we were out there and I just said ‘That’s what I’m talking about,’” Kentucky coach John Calipari on the defensive capability his team could have.

Quote of the Week 2: “We have stout and stud-filled D-linemen. We have a lot of guys that can make plays against anybody we play,” UK offensive tackle Darian Kinnard on UK’s defensive front.