Buddy Guy is scared about the future of blues music 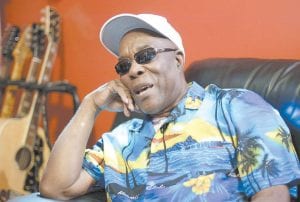 Blues great Buddy Guy, a member of the Rock and Roll Hall of Fame, is seen during an interview with the Associated Press at his club Buddy Guy’s Legends in Chicago’s South Loop. (AP Photo)

Ask Chicago guitar legend Buddy Guy about the future of the blues and he’ll give a depressing — but direct —answer.

“It’s scary,” Guy said during an interview upstairs at his club, Buddy Guy’s Legends, in Chicago’s South Loop. “I’m still going to play my music because I love what I’m doing, but we need all the support we can to keep the blues alive.”

After five decades in the business, Guy is doing what he can to make sure the genre — and his late contemporaries like Muddy Waters, Howlin’ Wolf and Junior Wells — lives on. Earlier this year Guy wrote his autobiography, “When I Left Home,” and the Rock and Roll Hall of Fame member is mentoring Massachusetts eighthgrader and blues guitarist Quinn Sullivan.

And Guy will likely garner attention in December when he receives a 2012 Kennedy Center Honor.

“He has expressed his fear that it may be all lost after he’s gone,” said Janice Monti, a sociology professor at Dominican University who studies blues music. “I think as he’s gotten older he’s incredibly aware of this mandate he received from Muddy and the Wolf to keep this all going.”

“It’s a tough time for blues because if it was being played, other than satellite radio, on the peak hours, prime time, then somebody would know about it,” Guy said.

That’s one of the reasons the 76-year-old Guy took on mentoring 13-year-old Sullivan, who he said plays “as well as Eric Clapton, me and B.B. King. How do you learn that at that age? That’s a natural.” Guy has Sullivan open for him on tour and record on his label.

“If you don’t have role models the young people now will not learn how to play,” Guy said.

The relationship is a boon for Sullivan, who said he most enjoys trading guitar licks with Guy.

“I have a smile on my face every time I’m in his presence,” Sullivan said. “He’s a living legend. I couldn’t ask for more. It’s just a great thing that he’s helping me with my career.”

In Chicago, Guy found work driving a tow truck during the day and playing blues clubs at night. Guy eventually earned a spot as a regular session musician at the city’s famed Chess Records and found a mentor in blues musician and producer Willie Dixon. Guy formed a band with Junior Wells and played with The Rolling Stones and the Grateful Dead.

Guy developed his own recording career later, with music like the 1991 best-selling record, “Damn Right, I’ve Got the Blues.”

Spreading the news of the blues was another reason Guy decided to team with author David Ritz to write his autobiography.

“I just want a true story about some of the great people who didn’t write a book and left me with this history of information,” Guy said.

The book details his childhood in Louisiana, his move to Chicago 55 years ago and his music career. He said he considers his performance for President Barack Obama at the White House in February with Stones singer Mick Jagger to be the professional pinnacle of his career. Guy successfully prodded the president to sing a few lines of “Sweet Home Chicago.”

“To say you played the blues with the president sitting there smiling, that’s one you can’t forget,” Guy said.

Besides the hall of fame, Guy earned many accolades later in his career: a half-dozen Grammy Awards, Billboard magazine’s Century Award and the Blues Foundation’s Keeping the Blues Alive Award. When he turned 75 in 2011, the city of Chicago renamed the stretch of Wabash Street in front of his club “Buddy Guy Way.”

But it still weighs heavy on Guy that his contemporaries aren’t around to be honored as well.

“Every time I’m interviewed I give credit to those people but they should have got all the awards that I got and they didn’t get them because the blues wasn’t exposed and they were some unknowns,” Guy said.

It could also explain why Guy still tours, playing internationally and as many as 16 shows a month.

“I don’t know nothing else to do now,” Guy said. “I’m enjoying it. I get tired, but you get tired if you’re working in the steel mills, so what’s to complain?”