By ROGER ALFORD
The Associated Press 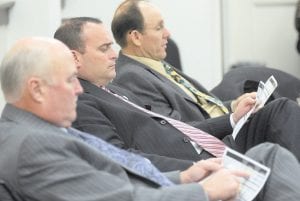 Democratic House Speaker Greg Stumbo acquiesced, saying he sees no need for the state to continue paying the stipend since Abramson commutes from his home in Louisville.

Abramson spokeswoman Kerri Richardson had no immediate comment about the decision. Stumbo said Abramson has been mum on the issue.

“I never heard from him, and the governor didn’t say anything about it, so I assume they think that’s fair,” Stumbo said.

Kentucky began paying a housing allowance to lieutenant governors more than a decade ago in a cost-saving move. Previously, they lived in a state-provided mansion.

A final budget deal hasn’t yet been reached between negotiators for the House and Senate who worked into the night Tuesday trying to work through disagreements on spending priorities in the bare-bones budget.

Leaders in the Democraticcontrolled House and Republicanled Senate said they’re optimistic that they’ll reach an agreement on a two-year budget plan in the waning days of the legislative session.

Proposals would cut spending in several ways, including scrapping cost-of-living increases in the monthly pension checks of some 200,000 government retirees, eliminating proposed scholarships for Appalachian college students and skipping pay raises for teachers and government workers.

Negotiators worked until after 8 p.m. on Tuesday and scheduled talks to resume.

One of the sticking points involved how revenue from the state’s tax on mined coal would be appropriated, including $6 million that House Democrats want to use to provide the Appalachian scholarships.

The negotiators talked at length Tuesday night about differences in proposed appropriations for indigent hospital care in Louisville. The House proposes $41 million for the next two years while the Senate pledges $30 million but agrees to more if the city of Louisville contributes more. They’ve not yet reached agreement on that issue.

Senate Republican Leader Robert Stivers II of Manchester said he’s encouraged by the budget talks so far. He said negotiators are aiming to finish before 3 a.m. Thursday, the logistical deadline for printing the budget prior to a Friday evening floor vote.

Negotiators allowed cameras from the public television station KET in the conference room where they have been working. Reporters monitored the meeting from the KET feed.

In Kentucky, lawmakers long ago excluded themselves from provisions of the state’s open meeting law.

The tedious negotiations involved discussions of differences between appropriations and spending cuts proposed by House and Senate in a budget strained by economic woes.

Economic indicators show Kentucky slowly rebounding from the recession, but not fast enough to offset the additional budget cuts that lawmakers were wrangling over.

With only four days remaining in this year’s legislative session, negotiators haven’t yet tackled the state’s two-year, $3.5 billion Road Fund budget. Stumbo said he expects a budget deal soon between the House and Senate negotiators.

“It’s like two mules fighting over a turnip,” he said. “There’s not much there to fight over.”

Both sides wrangled over preauthorization of $ 100 million in debt for the School Facilities Construction Commission during fiscal 2014-16. The Senate wants to delete that language from the budget proposal. The House insists on keeping it.

“It’s built schools all over the state,” Stumbo said. “We just hate to see it abandoned.”