Buescher emerges in the fog at Pocono for first Cup win 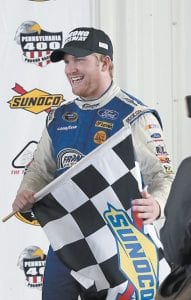 Chris Buescher sat in his Ford, hoping that the fog would stick over Pocono and the cloud over the rookie’s middling season would start to lift.

Buescher idled in his car, then stood with his arms folded on pit road.

Buescher emerged from the fog to become a surprising winner in Monday’s shortened Sprint Cup race at Pocono Raceway. He is now on the verge of being in the mix for NASCAR’s championship after not finishing better than 14th all season before Monday.

Imagine a title push that kicks off with Kyle Busch, Jimmie Johnson and little-known Buescher in the field.

“The plan was to always make the Chase,” Buescher said. “We’re that much closer now.”

He’s not there yet. Buescher is six points behind David Ragan for 30th to reach the cutoff needed to become eligible for the Chase for the Sprint Cup championship.

Buescher, who drives for underfunded Front Row Motorsports, was the beneficiary on a rare Monday race postponed a day by rain. With nasty weather punishing the track, NASCAR called the red flag with 22 laps left and parked the cars on pit road. Buescher was as much a spectator in the No. 34 Ford as the few fans left in the stands, though NASCAR let drivers get out of their cars after about 10 minutes as they waited out gloomy conditions.

“I’m a little scared to get out,” Buescher said.

No need. He was declared the winner after about an 80-minute delay. He was doused with beer and water in a makeshift victory lane celebration inside a garage stall, his Ford covered on rainy pit road instead of bathed in confetti.

In order to qualify for the Chase, drivers must rank 30th or better in points. Buescher will need to find a way to climb higher over Ragan in the final five races before the Chase field is set.

Buescher won twice last season in the Xfinity Series and won the series championship. He will spend 2016 as basically the fourth Jack Roush driver because of a shared technical alliance between the organizations.

He finished 30th or worse 10 times this season. Ragan had Front Row’s only victory 118 races ago in fall 2013 at Talladega.

Veteran crew chief Bob Osborne gambled with the decision to keep Buescher on the track while others made pit stops with 28 laps left. Once the cars were halted, Buescher and his crew rooted for the rain and fog to stick around. At one point, the 23-year-old Buescher, a former ARCA champion, rested against a fence and was swarmed by fans and photographers wanting a picture before the race was even called.

“I’m trying to remember every rain dance I’ve ever learned,” he said in the car.

Buescher is now on the brink of becoming the first Chase bracket buster. Led by four-time winners Busch and Keselowski, there are 11 slots seemingly set for race winners, and Buescher would make 12. Jamie Mc- Murray, Chase Elliott, Austin Dillon, Ryan Newman, and Kyle Larson are among the four winless drivers battling for the final four spots.

“This is going to change our whole year right here,” Buescher said.

NASCAR defended dragging out the decision to call the race, even as severe storms hit a track where a fan was killed by a lightning strike in 2012.

Here are other items of note from Monday’s race:

With rain looming toward the halfway point, Larson and Dillon engaged in a thrilling five-lap battle for first. Larson kept his tight lead with a timely block of Dillon just two laps shy of the halfway point. Dillon dipped low and briefly snagged the lead, only for Larson to snatch it right back at the halfway point that made the race official.

But Larson and Dillon took their door-to-door battle on the high line, allowing Joey Logano to swoop low and seize the lead in one of the most exciting midrace moves of the season. Logano, the 2015 Daytona 500 champion, pulled away in the fog — but Elliott got loose and turned Logano into the wall with 55 laps left in the race and sent his 22 to the garage.

Martin Truex Jr. run up front from the pole was a short one, the former Pocono winner’s race derailed by a flat right front tire. Truex led 16 laps early until the tire blew and forced him to pit road for repairs. He had multiple issues once he returned to the track and finished 38th.

Truex has one win this season and won the June 2015 Pocono race. Truex said his No. 78 Toyota was strong enough to contend for a victory.

“A lug nut spun off, hit the ground, bounced behind the wheel somehow and knocked the inner valve stem off,” he said.

Jeff Gordon’s track record for wins remains at six. Gordon, filling in for Dale Earnhardt Jr. for the second straight week, battled a seat belt issue and finished 27th. Earnhardt missed his third straight race because he suffers from symptoms of a concussion. Hendrick Motorsports has not said who will drive the No. 88 Chevrolet on Sunday at Watkins Glen.

Logano is the defending race winner at Watkins Glen.