Bugs do bug us, but pose few risks 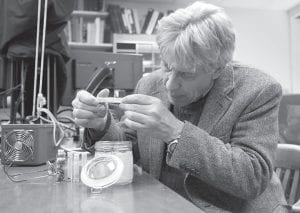 Dr. Jonathan A. Coddington, Associate Director of Research and Collections, examined vials of preserved brown recluse spiders at the Smithsonian Institution National Museum of Natural History in Washington. It’s that time of year when the bugs emerge to bug us. Some can pose real threats — Lyme disease from tiny ticks, West Nile virus from mosquitoes, or life-threatening allergic reactions to bee stings. But most bug bites in this country are an itchy nuisance. (AP Photo)

It’s that time of year when the bugs emerge to bug us.

Some can pose real threats — Lyme disease from tiny ticks, West Nile virus from mosquitoes, or life-threatening allergic reactions to bee stings. But most bug bites in this country are an itchy nuisance.

How itchy or big the welt depends in part on your own skin, how much of the chemical histamine it harbors. Yes, some people really are mosquito magnets. And no, most of the bites people blame on spiders aren’t from them at all.

In fact, chances are you won’t be able to tell the culprit unless you catch it in the act. Yet doctors and entomologists alike field calls asking, “What bit me?”

“People call up really bummed out,” says spider expert Jonathan Coddington of the Smithsonian Institution’s National Museum of Natural History, who points to just two worrisome types in the U.S., the black widow and brown recluse family. Spider phobia, he says, is “out of all proportion to actual risk.”

It’s not uncommon to have a large skin reaction to any bite or sting, and Dr. Reid Blackwelder, a family physician from East Tennessee State University, sees a couple of them a week in the early spring and summer.

“Most of the time, what people need is reassurance,” he says.

To explore the most bothersome biters, Coddington offered The Associated Press a behind-thescenes look at some of the millions of specimens in the Smithsonian’s entomology collections that scientists use to identify and study insects and arachnids.

Mosquito bites probably are the most common. Sure we’ve been told to watch out for them at dusk and dawn. But the Asian tiger mosquito — a fairly recent immigrant that has spread to 30 states since arriving hidden in some tires in Texas — bites all day long. It’s a more aggressive, harder-to-swat version than native species, Coddington says.

If it seems every mosquito’s after you, well, there are about 3,500 species around the world and Coddington says most don’t bite humans, preferring other animals instead. But those who do can be attracted by sweat, alcohol, perfumes and dark clothing.

Bedbugs are the latest headline-maker. Scientists can’t explain why they’ve suddenly rebounded in many U.S. cities after all but vanishing in the 1940s and ‘50s. But once they’re in a building, they’re famously hard to eradicate. You won’t feel their needle-like bite, but you might see a line of red dots in the morning.

Not so with horse flies and black flies. They cause painful welts, and they’ll chase any blood meal. And yellow jackets may be a bane of summer picnics, but they’re most aggressive in the fall, the reproductive mating season, Coddington notes.

Most people face no risk other than infection from scratching, but there are some important exceptions:

—Blacklegged tick species, commonly called deer ticks, that are as small as poppy seeds can transmit Lyme disease. The Centers for Disease Control and Prevention counted more than 35,000 confirmed or probable cases of Lyme in 2009, the latest data available. These ticks are most active from May through July, and are most common in the Northeast, mid-Atlantic, upper Midwest and Pacific coast.

If a tick’s been biting for less than 24 hours, chances of infection are small. So do a daily tick check. And the CDC recommends using insect repellent with DEET.

Antibiotics easily cure most people of Lyme. But other than Lyme’s hallmark round, red rash, early symptoms are vague and flu-like. People who aren’t treated can develop arthritis, meningitis and some other serious illnesses.

— West Nile virus is the main mosquito concern in the U.S. Although cases have dropped in the last decade, the CDC recorded 45 deaths from West Nile last year. Severe symptoms fortunately are rare but include high fever, neck stiffness, disorientation, coma, muscle weakness and paralysis, and the neurological effects sometimes are permanent.

— At least 40 people a year die from allergic reactions to stings from bees or other insects, according to the American Academy of Allergy, Asthma & Immunology. Potentially lifethreatening reactions occur in fewer than 1 percent of children and 3 percent of adults.

But seek care quickly for signs of an emergency, Blackwelder stresses: Swelling on the face or neck, shortness of breath or feeling dizzy. People who know they’re allergic should carry an EpiPen.

— Bites from a black widow or brown recluse can require medical care, although fatalities are incredibly rare. You may not feel the black widow’s bite, but within about an hour pain spreads through the abdomen, with cramping or rigid abdominal muscles. Poison centers stock antivenom, but most people do fine with muscle relaxants and other care, says Blackwelder, a spokesman for the American Academy of Family Physicians.

A brown recluse bite eventually forms an ulcerlike lesion that can get fairly large but usually requires just good wound care, he says. But other infections can be mistaken for these bites, so Coddington says bringing in the suspect spider helps identification.