Building of health department begins with ceremony on site 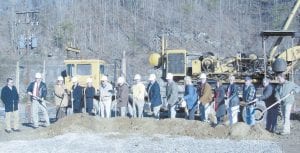 Construction of the new Letcher County Health Department could possibly be completed by spring 2009, says the department’s director, Lana Mullins.

The official groundbreaking of the $5.2 million project took place Monday morning at the future site located where the old Suburban Motel stood on East Main Street in Whitesburg.

“This is something our staff has wanted to do for quite some time,” said Mullins.

The 32,000-square-foot center designed by Richardson Associates of Whitesburg will consist of three stories. The first floor will serve as the clinic, while the second floor will house administration and the third floor will be used for storage.

Letcher County/Judge Executive Jim Ward said the project will “put the property to good use to benefit the people of Letcher County.”

Whitesburg Mayor James Wiley Craft said the building is “a very important part of the wheel of progress for this town.”

“It is an important day for our health care but more importantly, or equally as important, the landscape here in Whitesburg,” said Craft. “We got rid of the eyesore that was part of the city and now we are getting ready to put a $6 million building in its place. Whitesburg is going to be the gem of the mountains in years to come.”

State Rep. Leslie Combs she is proud and honored to be a part of the project and what it will mean to Letcher County.

“It will improve medical care, particularly for the people who need the services. Prevention is the key,” said Combs.

Combs also said that she enjoys visiting the county and she feels like a Letcher County resident.

“I am very proud to represent Letcher County and I feel like it is home,” said Combs.

State Sen. Johnny Ray Turner said he is looking forward to the job Codell Construction of Winchester does because he knows it does a great job of overseeing projects.

“This project will bring a lot of things to Letcher County and to Whitesburg,” said Turner.

Ward said the Letcher Fiscal Court has discussed in a recent executive session purchasing the old health department building, which is located adjacent to the courthouse.

“We’re going to acquire the old health department and try to get the commonwealth’s attorney up here,” said Ward.

Ward said the sheriff’s department might also move into the old health department building, which was erected in 1965.

Ward said the Letcher County Clerk’s office has outgrown its space and there has been talk that the office could expand into where the sheriff’s department is now located.