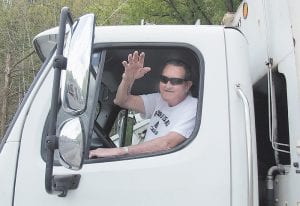 Whitesburg Sanitation Dept. supervisor Donald “Bulldog” Cummings waved from the cab of the city’s garbage packer as he prepared to go to work picking up trash the day before his April 30 retirement. (Eagle photo)

As you might imagine, Donald “Bulldog” Cummings has learned plenty of secrets about people while picking up their garbage over much of the past 40 years. But don’t look for him to tell what he knows anytime soon.

“What you see in garbage you don’t tell,” Cummings said on the eve of his retirement from the Whitesburg Sanitation Department. “I could write a book, but I might get killed.”

On April 30, the 72-year-old West Virginia native made his last run as the city’s sanitation department supervisor and chief truck driver. He said he is retiring so he can spend more time with his six grandchildren and two great-grandchildren.

Cummings, who lives at Big Cowan with his wife Carolyn, does admit to being a little put off by some of the strong smells he encountered during his first days on the job. 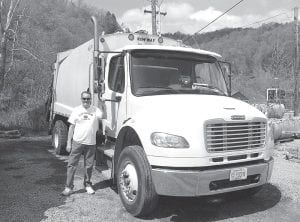 Donald “Bulldog” Cummings was photographed standing beside the garbage truck he operated until he retired from the City of Whitesburg on April 30. (Eagle photo)

“When I first started back in ’74, that was the stinkingest job I’d ever been around,” he said, adding that he quickly became “immune to” the smell because “you can’t hold your nose and pick up a garbage can at the same time.”

Continuing improvements in the way trash is disposed of have made the job of a garbage man much more pleasant today, Cummings said.

Cummings recalls that one of the stops he dreaded most during his early days on the job was the old A&P Food Store on River Road in Whitesburg.

“We used to have to pull up to their back dock and shovel all of their garbage into the truck,” he said. “They just threw it out there on the dock and we had to shovel it up. Now they would have to use a Dumpster.”

Carolyn Cummings said her husband has always considered helping the elderly and sick with their garbage as the highlight of his job.

“Don took care of the elderly and the sick,” she said. “He would go behind their homes and carry their garbage to the truck. He’s good to people; he’s a people person.”

It was, in fact, that ability as a “people person” that landed Cummings in Whitesburg back in 1968. Then a truck driver for a firm located near his birthplace of Charleston, West Virginia, Cummings accepted an invitation from Mike Sexton, a Whitesburg native who worked at the same trucking firm, to travel here with him for a visit. While here, Cummings became smitten with Sexton’s younger sister, Carolyn. Soon, the two were married and Cummings began working in the mining industry, both driving a coal truck and working underground.

With the coal industry slumping badly in the preboom days of 1974, Cummings found himself without a job and accepted the invitation of then-Whitesburg Fire Chief Philmore Bowen to go to work for the city’s sanitation department. Cummings stayed with the city for a couple of years, but returned to his mining job when the hourly pay became too much to turn down. Thereafter, each time the coal industry would slump and Cummings lost his job to a layoff, he was able to find a job with the city sanitation department. His latest — and longest — stint with the city began in 1990.

In all, Cummings has worked under five Whitesburg mayors, one who has since passed — Ferdinand Moore — and four who are still living — James Asher, Jack Howard, Nathan Baker and current Mayor James W. Craft.

Cummings was given the nickname “Bulldog” while working in the mining industry. “It was because I wanted to drive a Mack truck all the time,” he said. “Everybody in this town only knows me as Bulldog.”

When Cummings began working for the city, the sanitation department had only one large packer truck, which he and eventual Whitesburg Fire Chief Truman Thompson used to pick up garbage in an area that began at the Parkway Plaza Shopping Center in West Whitesburg and ended at the Whitesburg hospital in East Whitesburg. As the route expanded to include Ermine to the east, Whitco Hill to the west and all points in between, the size and scope of the sanitation department grew as well. The department now employs five men and conducts its own cardboard recycling program that, according to Cummings, “takes in over $20,000 a year. ” e love for

Th and respect of trucks Cummings developed at an early age continued during his years with the sanitation department.

“ I took pride in my trucks,” he said. “ I kept them clean and did the mechanic work when I could.”

Cummings said he washed the inside of the packer truck weekly before he was ordered to quit the practice by an inspector with the federal Occupational Safety and Health Administration. He said he was able to keep the trucks clean and relatively odorfree after the OSHA order by collecting trash at night and dumping it at the Millstone garbage transfer station the next morning. Cummings said he also learned to keep bad smells away by regularly pouring a quart of Pine-Sol into the bottom of the packer.

Mayor Craft said it will be hard to find another sanitation worker who shares the sense of pride and hard work Cummings displayed every day.

“He’ll be a hard man to replace,” Craft said. “I hate to lose him, but I understand his desire to retire so he can enjoy being with his family.”

Craft said Cummings will be honored next week (May 13) during a meeting of the Whitesburg City Council.

Cummings had wondered when the day would come that he would have to retire since suffering two heart attacks in 1993. Still, he managed to work for 21 more years before having to make the decision to, as he put it, “hang it up and enjoy the family.”

Cummings’ decision to retire from the city comes a year after he closed a successful upholstery shop he had operated with his wife for many years. He learned the craft from his father, who was an upholsterer in West Virginia.

Cummings said that despite many requests from former customers that he reopen his upholstery shop, working with furniture for pay is not among the ways he will be spending his time during retirement.

“I’ll always have something to do,” he said, adding that he plans to spend a lot of time fishing with his grandchildren.

“My grandkids want me to go fishing and my wife’s been on to me for two years to quit,” Cummings said.

Bulldog and his wife have three children, sons Donald Jr. and James, and daughter Angel. They also have six grandchildren — Ethen, Dominick, Evan, Jace, Richard and Tiffany — and two great-grandchildren, Emmalyn and Bryson.

Cummings said he will never forget how well he has been treated by the public while working for the city.

“The people of this town have been outstanding,” he said.

Cummings said that it out of respect for those who were “excellent to me” that he would never tell the secrets he has learned about them during his years on the job.

“I always thought that what everybody did was their own business,” he said.