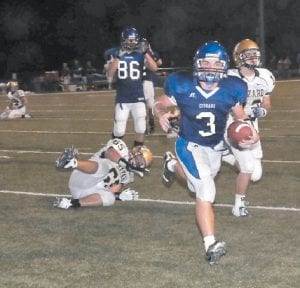 Letcher County Central’s Drew Bentley left Hazard defenders behind as he crossed the goal line for a touchdown during the Cougars’ 48-34 loss to the Bulldogs on Friday. (Photo by Chris Anderson)

It’s week three for the Cougars of Letcher Central and things are not getting any easier.

With a record of 1-1 that included a victory over South Laurel and a loss last week at Middlesboro, the Cougars finally got to come off the road and host a game at home. The opponent was the second ranked team in Class A football, the Hazard Bulldogs.

Hazard has really made some noise the last few years including one appearance in the state title game. It is led by coach Mark Dixon and came in with a record of 1-0 after a blowout win over Leslie County. It is led by senior quarterback Jon Combs and a stable of talented backs.

The stands were packed and the feel of fall was in the air. The Bulldogs won the toss and deferred and the Cougars opened on off ense. They drove to the Hazard 49 behind Jesse Rose and Logan Johnson. Hazard got a facemask call against Ryan Hall and the Cougars had a first down on the Hazard 22. After a loss of three, the turnover bug struck again. A low snap from center resulted in a fumble by quarterback Logan Johnson and Hazard was all over it.

The Bulldogs took over on their own 30 and Combs went to work. He hit Blanton over the middle to the 44 and then connected with B.J. Combs for 57 yards and a quick score to give the Bulldogs a 6-0 advantage. The Bulldogs took advantage of the turnover and converted much as Middlesboro did last week as the Cougars turned the ball over twice late in the game.

The Bulldogs missed the point after and the Cougars took over. On the kickoff Chris Tyree returned the ball all the way to the Hazard 27 and the Cougars were back in business. Johnson picked up a quick 10 yards and Rose moved it down to the 10. Drew Bentley got to the 1 and Johnson pounded it home with 3:38 in the first quarter. The conversion was no good and it was 6-6.

Hazard marched right back as another one of the Olingers from Hazard took off all the way to the Cougar 3. As he was being tackled he lateraled the ball to Combs and he took it on in for the score and a 12-6 Hazard lead with 2:11 in the first quarter.

Hazard caught the Cougars off guard on the kickoff and recovered an onside kick at midfield. The Cougars’ frustration set in as they got two facemask penalties and set up the Bulldogs down on the Cougar 24. Hazard moved to the 4-yard line where Combs took it in and the Dogs led 18-6.

The Cougars came back and moved the ball inside Bulldog territory to the 38. Johnson had a beautiful run to the 22 as he broke several tackles. Bentley got to the 15, but a holding call put it back on the 25. A pass to Tyree at the goal line was dropped and a pass to Rose in the end zone was knocked down and the Bulldogs had held and took over on off ense.

Combs went to the air and quickly moved to the Cougar 32. He hit Zack Blanton on the next play for the 32 yard score and a 24-6 Bulldog lead.

Hazard’s speed was really starting to show and the Cougars had no answer. They came back on the next series and moved to the Bulldog 45. From there Johnson hit Drew Bentley on a perfect pass play and Bentley did the rest as he took it in from 45 yards out.

The score stood at 24-12 with a minute left in the half. That was all the Bulldogs needed as Combs found B.J. Combs all the way down on the Cougar 32 and again hit Combs in stride for the quick score and a 30-12 Bulldog lead. The score would stand at halftime.

The second half started with the Bulldogs back on off ense and it got ugly. Tempers started to flare and one of Hazard’s players was ejected. Their coach also got a penalty and after a penalty on the bench, the Cougars had the ball and 45 yards in penalties to set themselves up at the Bulldog 26. They could not take advantage as Johnson was sacked twice and Hazard took over on downs. Combs took off on a keeper up the middle all the way to the Cougar 8, and then connected in the end zone with Koree Slone and the Bulldogs were rolling 36-12.

The Cougars would not go away. As the fourth quarter began they moved to the Hazard 14 where Johnson connected with Jesse Rose on the next play for a 14- yard touchdown and the score was 36-18. The conversion to Matt Boggs was good and it was 36-20.

The Cougars tried an onside kick, but Hazard recovered and Combs was replaced at quarterback by Blanton. They didn’t miss a beat. On a play from the Cougar 24, Blanton ran it to the Cougar five and took it in on the next play and the score ballooned to 42-20. Hazard was really showing it deserves the number 2 ranking.

On the kickoff Chris Tyree had another beautiful return all the way to the Hazard 5 yard line and Bentley took it in on the next play. The score was 42-26.

The Dogs answered as Blanton ran the ball five times and marched the ball to the Cougar 1-yard line and scored from there. He is as good at running the ball as Jon Combs is at throwing it.

The Cougars answered on a pass to Bentley as time was running out to make the score 48-32. The conversion to Keaston Hall made it 48-34 and that would be the final.

The Bulldogs are for real and they deserve their ranking. Their speed is really impressive and Combs and Blanton are both good quarterbacks. Combs threw for 356 yards and five touchdowns and ran the ball 12 times for 115 yards.

The Cougars also had a good offensive night with Johnson connecting for 267 yards and three touchdowns. They had 111 yards on the ground for a total of 378 yards, but it was too much Hazard on this night. The Cougars were hurt early in the game with the turnover and the penalties and it set the tone for the night.

The Cougars played their hearts out, but they have to forget this game and prepare for next week. The Cougars fall to 1-2 and now must get ready to travel to Cam Stadium to take on the Belfry Pirates and then they will get ready for district play.