Burdine residents angry that P.O. may be closed 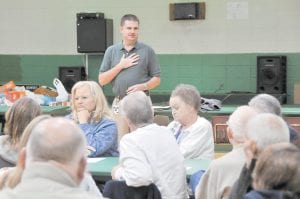 U.S. Postal Service official Bryant Clevenger addressed the crowd at the Burdine Elementary School during a community meeting Monday evening. The meeting was to allow customers of the Burdine Post Office to voice concerns with the proposed closure of the office.

At a meeting held Monday night at Burdine Elementary School, residents voiced their concerns over the proposed closing of the Burdine office, which was established nearly 114 years ago. Bryant Clevenger, manager of Postal Service operations in eastern Kentucky, urged the crowd of about 80 to write letters to U.S. Congressman Harold “Hal” Rogers and other elected federal offi cials and tell them about their passion and love for the Burdine office.

“You’ve got to put your heart and feelings into why it shouldn’t close,” Clevenger said.

Clevenger painted a bleak picture of the Postal Service’s financial crisis, saying the difficulties have led the agency to consider closing nearly three-dozen rural post offi ces in eastern Kentucky, including Burdine and eight others in Letcher County. Bryant told the audience he is not one of the officials who will ultimately decide the Burdine office’s fate. He said his job is to listen to citizens’ concerns and report those concerns back to higher levels of management within the Postal Service.

Citizens were given the opportunity to voice their opposition to the closing, and many spoke of the changes in mail delivery if the office is closed. Among their concerns were mail security along rural routes and handicap accessibility at the Jenkins Post Office.

Perhaps the most signifi- cant complaint by those in attendance is the potential loss of a community hub.

District Five Magistrate Wayne Fleming said losing the post office would be equivalent to a community losing its identity.

“If the school closes, or if the post office closes, the community dies,” Fleming said.

Fleming, who lives at Burdine and was also speaking on behalf of 94th Dist. State Rep. Leslie Combs, suggested closing post offi ces on Saturdays and reducing the operating hours of rural post offices in order to save money. Clevenger said such steps have been taken, but more must be done to save money.

Also speaking at the meeting was former longtime Burdine Postmaster Laura Childers, who said the USPS expressed a desire to keep the office open after a fire there in 2010. Childers asked why the agency wanted the office repaired and reopened if it planned to eventually close it because of financial problems.

Clevenger praised the members of the audience for voicing their concerns, even as some in attendance aimed their frustrations at him.

Clevenger said a representative from Rep. Rogers’s office had planned to attend the meeting, but cancelled in favor of another meeting in Prestonsburg.

Jenkins Mayor G. C. Kincer expressed disappointment with the lack of presence of a high-ranking official, saying Clevenger does not hold a position that would make those at the meeting feel like the gathering would bring any results.

“ I just don’t think we have the right person (here) to make me feel like we’ve gotten something out of this,” Kincer said, apologizing to Clevenger several times.

Clevenger told Kincer that he had extended invitations to several officials who did not attend the meeting.

Clevenger continued to encourage those at the meeting to write letters to officials. Letcher County Judge/Executive Jim Ward, while voicing concerns of his own, echoed Clevenger’s advice and spoke of the importance of the people making their voices heard.

“We want them to know we’re here and we want to keep our rural post offices,” Ward said.

Clevenger said the crowd at the Burdine meeting was the second-largest crowd he had seen throughout a series of similar meetings across the region.

The Burdine Post Office was established in January 1898, about 13 years before the City of Jenkins was established by Consolidation Coal Co. Burdine, which is a part of Jenkins, was named after Burdine Webb, who carried mail from Whitesburg.