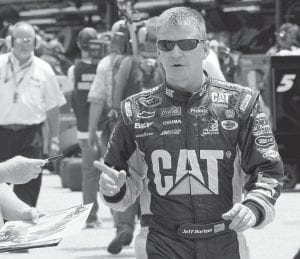 Jeff Burton might have won at Darlington Raceway if not for a late-race mistake in the pits. That’s been the story of the season for Burton, who likely would be a multiple winner if not for a slew of bad luck. (AP Photo)

Jeff Burton couldn’t have known in February, when he came up short at California on his chance to put eventual winner Jimmie Johnson a lap down, about all the missed opportunities there would be this season.

A brake failure at Atlanta, then a cut tire at Martinsville. There were pit road violations at Phoenix and Texas, and one of those unavoidable racing incidents at Talladega. Then came Saturday night at Darlington Raceway, where Burton had a car capable of battling Denny Hamlin for the victory.

Instead, miscommunication on the final pit stop caused Burton to run over his air hose — a gaff e that drew an immediate NASCAR penalty and instantly took him out of contention.

“Mistakes like tonight’s don’t win championships,” he said after the race. “We had a fast car, one that was capable of winning, and a pit road mistake cost us a chance at a win.”

That’s been the recurring theme to Burton’s season. He’s led laps in eight of 11 races this year, but has just four top-10 finishes to show for it. He could have celebrated multiple wins already this season, but is instead riding a 52-race winless streak dating to October 2008.

So there’s no way Saturday night was anything short of heartbreaking for Burton, who was long gone by the time Hamlin began his third victory celebration of the season. That so easily could have been Burton, whose hard luck and near-misses have been overshadowed by the similar struggles of four-time champion Jeff Gordon.

But for all the talk about how close Gordon has been this season, there’s been little mention of how the door often was opened by Burton’s own bad luck. At Martinsville, for example, Burton led 140 laps and seemed to have the race in the bag until he ran over something on the track and cut his tire.

Burton faded to 20th and it was Gordon who moved into the lead on the final restart, only to lose to Hamlin in a wild two-lap sprint to the finish.

Burton was flagged for pitting outside the box at Phoenix — another race that Gordon lost late — and he was penalized at Texas for a commitment violation. Still,

Burton was leading there late until a nine-car accident brought out a lengthy red flag. The handling on his Chevrolet went away after the break, and Burton faded from first to 12th in another Hamlin victory.

Asked about all those annoying issues before Darlington, Burton seemed to foreshadow what was still to come.

Burton had just traded the lead with Hamlin in the Southern 500 when caution came out and they pitted for the final time. Burton was the third car back on the track, but NASCAR called him back to the pits to serve a stop-and-go penalty for running over his air hose.

It dropped him to 13th on the restart with 20 laps left, and he had to charge hard to salvage an eighthplace finish.

“We are capable of winning races and we will win races,” Burton said. “We’ll get it together and we’ll go race next week.”

Adding to Burton’s frustrations is that winning just one of those races this year would have gotten him into the May 22 All-Star race. He’ll have two more chances to race his way in, this weekend at Dover and then in a qualifying event prior to the All-Star race.

“I will just be honest about it, I’m embarrassed that we are not in it,” said Burton, who isn’t qualified because he didn’t win a race in 2009.

He has nothing to be embarrassed about this season, though, which is shaping up to be a resurgence for Richard Childress Racing. Kevin Harvick ended his own 115- race winless streak with a victory at Talladega and is the current Sprint Cup Series points leader, Burton is ninth in the standings and Clint Bowyer was inside the top 12 but dropped three spots to 15th after a broken brake line spoiled Saturday night.