Bus ends up in ditch near Cowan, but no student injured seriously 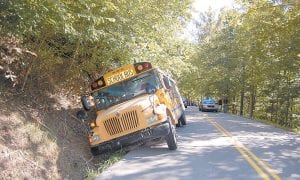 OFF (THE) ROAD VEHICLE — No students were seriously injured when a school bus went into a ditch at about 3:30 p.m. on Sept. 6 on Highway 588 at Ice. About 40 Cowan Elementary School students ranging from kindergarteners to eighth-graders were riding bus 1101, which was driven by former Letcher County Judge/Executive Carroll Smith.

No serious injuries were reported after a Letcher County school bus went into a ditch near Cowan Friday afternoon.

About 40 Cowan Elementary School students were riding on bus 1101, which was being driven by former Letcher County Judge/Executive Carroll Smith when the accident happened around 3:30 p.m. on Highway 588 at Ice.

“He said that he looked back in the mirror at the kids and the right front tire dropped off the road into the deep ditch,” said Letcher County Public Schools Supt. Tony Sergent.

Students, ranging from kindergarteners to eighth-graders, evacuated the school bus through the back emergency door because the bus door located on the right side was blocked by a hillside.

Three students were taken by ambulance and one by personal vehicle to Whitesburg Appalachian Regional Hospital, where they were treated for minor injuries and then released.