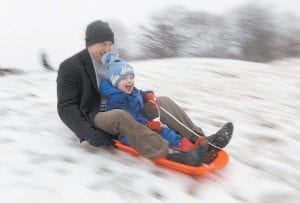 MYTHS ABOUT DADS — Matt Redmond, 3, and his father, Mike, rode a sled down a hill after an overnight snowfall in Baltimore. According to a government survey released Dec. 20, the detached dad is mostly a myth. Most American fathers say they are heavily involved in hands-on parenting, the researchers found. (AP Photo)

The detached dad, turning up his nose at diapering and too busy to bathe, dress and play with his kids, is mostly a myth, a big government survey suggests. Most American fathers say they are heavily involved in hands-on parenting, the researchers found.

The nationally representative survey shows fathers’ involvement has increased slightly since the government first asked in 2002, coinciding with research since then that bolsters the benefits of hands-on fathering.

The results are encouraging and important “because others have found the more involved dads are, the better the outcomes for their children,” said researcher Jo Jones of the National Center for Health Statistics, part of the Centers for Disease Control Prevention. She co-authored the new report.

More academic success, fewer behavior problems and healthier eating habits are just some of the ways fathers’ involvement has been linked with children’s well-being.

“Times have changed,” said Robert Loftus, 34, of Yonkers, N.Y. He quit a sixfi gure sales job a year ago to care for his two young children while his wife works full time. “We’re trying to rethink our priorities and family seems to be the No. 1 priority whereas in the past maybe people were more focused on career.”

The results build on volumes of research showing changes in the American family since the baby boom years and before, when women were mostly stay-athome moms and dads were the major breadwinners. As those roles shifted, so did the view that moms are the only nurturers.

University of Chicago sociologist Jennifer Bellamy, who also studies fathering, said some old stereotypes persist, “that dads are sort of the co-pilots in their families,” absent or less involved than moms.

But she said the survey confirms that fathers “are quite involved in a variety of different and important ways.”

The study involved nearly 4,000 fathers aged 15 to 44 who were interviewed in person between 2006 and 2010. One caveat: They selfreported their involvement, without input from their partners or others. Most men were married or living with a partner.

Key findings among fathers living with children younger than 5:

— 9 in 10 bathed, diapered, helped them use the toilet or get dressed at least several times weekly.

— Even higher numbers played with them and ate meals with them that often.

— Almost 2 out of 3 read to them at least several times weekly.

Among dads living with kids aged 5-18:

— More than 9 out of 10 ate meals with them at least several times weekly and talked with them about what happened during the kids’ day that often.

— Almost 2 out of 3 helped with homework several times weekly.

— About half took their kids to or from activities that often.

Overall, almost 90 percent of dads said they thought they were doing at least a good job of fathering.

Survey questions were based on whether dads were living with their biological or unrelated kids, or apart.

Most lived with their kids. Not surprisingly, men who didn’t were less involved with parenting activities. Even so, several times weekly, at least 1 in 5 still managed to help bathe, diaper, dress, eat or play with their kids. Fathers of older children were generally less involved than those with kids younger than 5 but that’s at least partly due to the changing nature of parenting as children mature.

The survey suggests black fathers may be more involved than whites or Hispanics with some activities, including homework, but Jones downplayed racial differences and said some were not statistically signifi cant.

Men with at least some college education were generally more involved with their kids than less educated fathers.

The CDC did a similar survey in 2002 that showed slightly less father involvement. Previous CDC surveys relied only on mothers’ responses about family life so aren’t comparable.