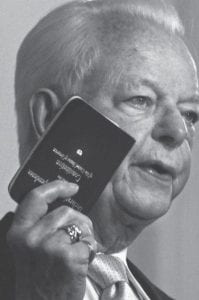 Sen. Robert Byrd held a copy of the Constitution he kept in his pocket as he spoke at the launching of his book “Losing America: Confronting a Reckless and Arrogant Presidency,” in 2004. A de facto parliamentary overlord, Byrd sought most broadly to restrain the power of the presidency, for America has no monarch, and to protect the minority party in the Senate from being crushed by the majority. (AP Photo)

How that man loved to speak.

Robert C. Byrd once talked in the Senate for 14 hours and 13 minutes straight. In his half century in that chamber he spoke of the Roman Empire, the West Virginia coal fields, the Peloponnesian War and the West Virginia mountains. He recited poetry, quoted the Bible like the lay preacher he once was and gave speeches about his little dogs Billy and Baby.

He talked about how vital it is to the very well-being of the nation that senators be allowed to talk as much as they want.

Byrd carried himself like a man from another century. Dead Monday at age 92, he nearly was.

His words seemed to spring from the flourish of a quill pen dipped in ink. He could channel Cicero and recite the names of all British monarchs in order.

A poorly educated son of Appalachia, Byrd became patriarch of the Senate, serving longer and casting more votes than any in history.

The West Virginian was its most passionate scold, teacher, interpreter, defender and manipulator.

Regardless of party, he took newcomers under his wing and never forgot a slight. He authored few pieces of groundbreaking legislation but ensured, in 2004, that every school that gets federal money and all federal civil servants must learn about the Constitution every Sept. 17, the date it was signed by the 1787 convention.

A de facto parliamentary overlord with a worn copy of that Constitution in his pocket, Byrd sought most broadly to restrain the power of the presidency — for America has no monarch — and to protect the minority party in the Senate from being crushed.

The more picayune the matter, the more eloquent he could be.

“Some in the Senate are ready to callously incinerate each senator’s right of extended debate,” he stormed in 2005 during a struggle over judicial nominees and attempts by the then-Republican leadership to close down debate.

Why should anyone outside Washington care if senators are made to shut up already?

Because, he said: “The uniquely American concept of the independent individual, asserting his or her own views, proclaiming personal dignity through the courage of free speech will, forever, have been blighted.

Not to mention: “And the American spirit, that stubborn, feisty, contrarian, and glorious urge to loudly disagree, and proclaim, despite all opposition, what is honest and true, will be sorely manacled.”

Byrd graduated from high school too poor to go to college. He pumped gas, cut meat, worked as a shipyard welder during World War II and drew crowds for his popular fundamentalist Bible lectures.

He had a segregationist past, vicious to modern eyes. In 1944 he wrote a letter against integration in military units by “race mongrels,” declaring “I shall never fight in the armed forces with a Negro by my side.”

He joined the Ku Klux Klan, becoming an Exalted Cyclops, and it was during his short time in that virulently bigoted organization that his talent for leadership was recognized and his aspirations for public office awakened.

Even years after disavowing the Klan, he stood for those 14 hours and 13 minutes in a vain attempt to stop the Civil Rights Act from becoming law, just one of the Southern Democrats clinging to the old ways.

Byrd “apologized a thousand times” for his Klan association and moved away from that past, a transformation now generations distant. In 2008 he lent a hand in electing the first black president, supporting Barack Obama for the Democratic nomination over Hillary Rodham Clinton.

In recent decades he railed against indignities to the institution, executed power plays behind the scenes and directed a gushing spigot of federal money to roads, bridge projects and buildings for his state. Byrd even managed to land a Coast Guard operation for landlocked West Virginia.

Colleagues are remembering him for unusual traits.

“He could drive from Washington to West Virginia and back again, reciting classic poetry the entire time, and not repeat the same poem twice,” Senate Majority Leader Harry Reid, D-Nev., said Monday.

“He twice read the Encyclopedia Britannica from cover to cover, from A to Z,” Reid added.

“He was the only American to earn his law degree while serving as a member of Congress.”

Byrd elevated any matter on his radar to paramount passion. He doggedly defended coal, not just as a source of jobs but as a chunk of his people’s soul. Whether it was his opposition to the presidential pork-cutting line item veto or the war, the future of the republic always seemed to hang in the balance.

“How long — how long, O Lord, how long?” he demanded two years ago in one of his many speeches opposing the Iraq war. “Four thousand, eighty-one American soldiers have died. Died! One can only die once.”

In 2007, needing two crutches to walk, Byrd thundered again, near tears. The frail old man startled those in the public gallery with the ferocity he summoned.

“Let that word resound from hill to hill and from mountain to mountain, from valley to valley across this broad land,” he exclaimed. “May God help those poor souls who would be so cruel. Barbaric! Hear me! I am confident that the hottest places in hell are reserved for the souls of sick and brutal people.”

Byrd had a passion for dogs, too.

Byrd’s 1990 speech about his dog and dogs through history: